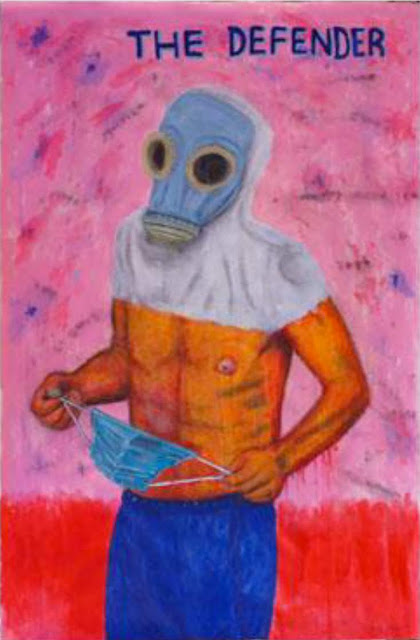 Overview: A trim, muscled male figure is bare above the waist,  wearing a gas mask with a covering that covers his head, shoulders and upper chest. He hold the straps of a blue protective mask between his hands.  There are a few marks, perhaps wounds on the left side of his torso. The purple background  above his waist has many blotches in it, perhaps evocative of the novel coronavirus.  He wears blue trousers, perhaps the garment of a medical worker; below his waist the background is a red field. The words, "The Defender" are written in the upper right corner of the image. 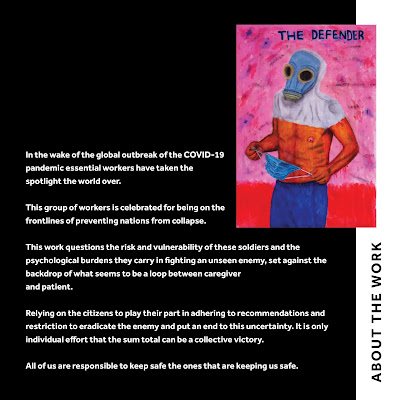 Artist's Statement:  In the wake of the global outbreak of the COVID-19 pandemic essential workers have taken the spotlight the world over. This group of workers is celebrated for being on the frontlines of preventing nations from collapse. This work questions the risk and vulnerability of these soldiers and the psychological burdens they carry in fighting an unseen enemy, set against the backdrop of what seems to be a loop between caregiver and patient. Relying on the citizens to play their part in adhering to recommendations and restriction to eradicate the enemy and put an end to this uncertainty. It is only individual effort that the sum total can be a collective victory. All of us are responsible to keep safe the ones that are keeping us safe. 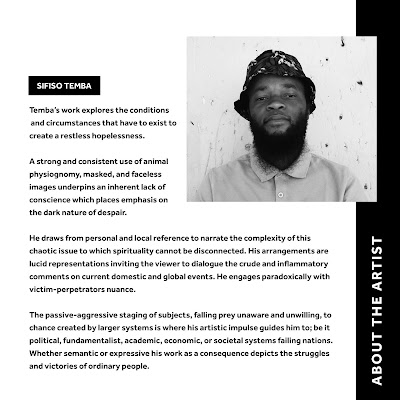 Pamela Allara: A graduate of Artist Proof Studio in Johannesburg, Temba was also a founding member of the Wang ‘Thola (Do you get me?) collective that worked with young children in the suburb of Cosmo, where many immigrants had settled and were victims of xenophobic attacks. His previous work has addressed the prevalence of crime and violence, with especial attention to the dangerous mini-bus ‘taxis’ that workers are forced to take from the townships to employment in the city. His work is usually direct in terms of its political statement, but this work, “The Defender,” is a bit more challenging to interpret.

A young man is depicted in a three-quarter length pose, turning towards us. He is shirtless and wearing what could be either sweatpants or hospital garb. His face is obscured by a large gas mask that causes him to resemble a bug. Often Temba gives his human figures animal heads, and the large empty eyes and the white, shroud-like covering make this hybrid bug-man appear ominous. In addition, he is standing in a field of blood-red grass, which is being ‘watered’ by the blood streaming from his left arm. 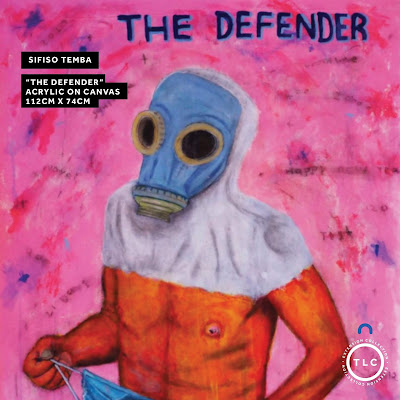 But if the figure can be seen as threatening, a sort of personification of the virus, the virus also seems to swirl around him in the pink background. As a result, the fact that his torso is shirtless renders him vulnerable. With a bit of effort, the nipple can be seen as an eye and the horizonal mark below, a mouth: in other words, the torso can be read as a face. The blue mask the figure holds in front of this ‘face’ signals protection, a defense against the surrounding illness. Is “The Defender” with his two protective masks, primarily concerned with protecting himself? According to the artist’s statement, this is not at all the case. He sees the ‘doubleness’ of the figure as referring to both the healer and the patient, both of whom are heroic, the former by attending to the stricken, the latter who by self-quarantining prevents the illness from spreading. Thus, in the end the bare chest may signal a reference to classical art historical heroes, or, on the other hand, may merely indicate that he is a fighter. Such is the positive interpretation of this figure, but in the end, the duality remains: if I were ill, I would not want this disturbing figure attending to me! 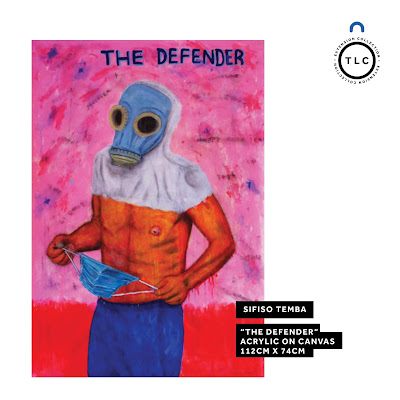 Mark Auslander; As Pam notes, in many works, Temba depicts human figures with animal heads, evoking the mystery of the masquerade.  Here, a large protective mask obscures the subject's facial features, giving him a somewhat uncanny, other-wordly or insect-like appearance. The double masking, between the archaic gas mask and the present-day blue medical mask, seem to speak to the intimate affinity referenced in the artist's statement, between patient and medical worker, each dependent on one another. The surrounding shapes, reminiscent of the SARS-CoV-2 virus, suggest that no degree of personal protective equipment may suffice, and that patient and caregiver are deeply at risk.

As in Ella Cronjé's contribution to the TLC Extension Collection, "All the King's Horses," a sculpted human body with a horse head, we are reminded in Temba's composite being of the hybrid figures of mythology and ritual performance.  The chimera is an appropriate motif in our pandemic era: as our bodies become hosts to an alien viral pathogen and our cells are transformed into factories through which the novel coronavirus reproduces itself. Thus,  lines between "us" and "not us" are intimately blurred. We become the very thing we fight against.

Speculatively, Sifiso Temba may allude as well to the initiatory process through which the incipient gifts of the Xhosa traditional healer (igqirha) and other diviners in southern African societies are gradually activated. Novice healers generally experience disorienting dreams and visions of wild animals and ancestral shades, to whom they become intimately bound  as they learn how to care for those in great need (Bool & Edwards 2014).  Diviners reside on the dynamic thresholds between the visible and invisible worlds, and in sense between the domains of health and illness; as "wounded healers" they embody the continuous, difficult transition process between disease and recovery which their patients urgently require (Comaroff 1980, 1981). The body of the spiritual healer thus becomes, in Milisa and Nel's terms (20143) a "spiritual barometer" in which the patient's positive and negative energies are registered, embodied, and then productively re-channeled.  Such would seem to be the case with the hybrid figure envisioned in Temba's painting, binding together the afflicted and the healer, the human and the non-human, the wound and the salve, in the striking image of a defender who is no stranger to great suffering.

In this light, it is possible that the painting also references the ultimate "wounded healer" in the Christian tradition.  The subject's shedding of blood and the marks on his side may evoke the final of Christ's five wounds, a frequent subject in Christian iconography, made when a Roman soldier's lance pierced the side of the chest of the crucified Jesus to determine if he were truly dead.  The work in this sense seems to echo South African HIV/AIDS iconography of the 1990s, in which persons with AIDS were sometimes depicted in Christ-like postures. The implication would seem to be that frontline medical workers risk martyrdom on a daily basis. Perhaps, through them  the broader social world, reconfigured as a community of care, is offered a chance at shared redemption.

Jean Comaroff. 1980. Healing and the cultural order: the case of the Barolong boo Ratshidi of southern Africa. American Ethnologist (November)

Posted by Mark Auslander at 5:29 PM