Ramarutha Makoba
Relwa ntwa ya kokwana took ya Corona
(From sePedi: "Together We are fighting the sickness of Coronavirus")
2020
Charcoal, acrylic and pastels on fabiano paper.
140x80 cm


Overview: The image is dominated by a large, front- facing  male figure, a miner, clad in a protective mask,  mining ear protection, glovs, boots, and work uniform. In the left  background, we see a large mining shaft, its wheels in red. Behind the figure we see houses and several smaller figures, one with his back turned to us, pushing a wheelbarrow To the right, roughly balanced with the mine shaft we see the outlines of a lone tree in full foliage, as well as a streetlight, and a distant cityscape. Above the horizon, flanking the figure, we see drawn lines in red and black, perhaps evocative of energy or even of angels' wings. 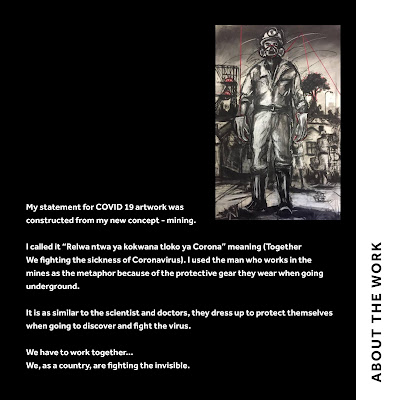 Artist's Statement: My statement for covid19 art work was constructed from my new concept which is mining. Named it "Relwa ntwa ya kokwana took ya Corona"  meaning (Together We are fighting the sickness of Coronavirus). I used the man who works in the mines as the metaphor because of the protection gear they wear when going underground. It is as similar with the scientist and doctors how they dress up to protect them when going to discover and fight the virus. The country has to work together during this covid19 as the mining plays a big role. How? The mining needs save lives by making sure it produces its main functioning. The doctor and scientist needs the power of electricity in order to perform their duties to save lives of those who are infected by the virus. The patrol stations needs to be filled with oil to fill the transportation in order to reach to the patients and hospitals at any time of state of the emergency. We as the country we fighting the sickness that is invisible. As the world we need to work hand in hand to fight the covid-19 and help our presidency by respecting and complying with the regulations. My inspired art work I look at it and see the man who's ready go in a war to fight and who has a belief that through God we will overcome the covid 19 pandemic. It is a prayer again that through God we will win the coronavirus. 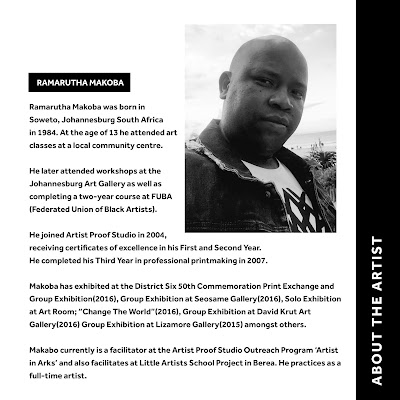 Pamela Allara: In Makoba’s composition, the miner’s body fills the space vertically from top to bottom. It is evident from his firm, rooted stance that he is resolute, determined and immovable. Behind him on the left is the rigging for a gold mine, which is the historic source of Johannesburg’s wealth, but also of the creation of a severely exploited labor force. Unlike the miners in Kentridge’s film “Mine” (1991), however, this miner’s body is not broken, far from it. Behind him in the lower register are township houses that frequently appear in Makoba’s artwork. In front of the house on the right is a boy, partially obscured by the miner’s arm, playing with a wire toy car. A woman carrying a bag has her back to us, as if she is about to enter the house. Beyond and above the domestic scene is a tree and an electric light fixture; this township has grown up around the mine itself, so that families do not have to be separated, as they were in the past when miners left their families in remote rural villages. Our fearless miner is ‘keeping the lights on’ and the family together in a time of crisis. 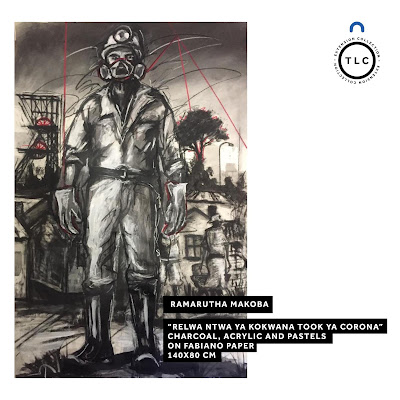 David Coplan:  I appreciate the artist’s use of red accents, especially the mining head-gear, and the lone tree, that like the miner stands unbowed amid the industrial wreckage. These accents enliven the image and draw attention to key elements just enough, producing a nice compositional balance. The central figure is outsized, not only proportionately but also because he is not posed in front of the mine or its structures but rather before a low, rambling set of humble structures off-mine that represent where camp followers and even some miners and families live. There is a woman in the background to indicate a domestic setting. The mask is for Covid-19, but the side pieces appear more like the ear protection pads miners wear underground. His stance, as Mark notes below, is that of a gunslinger but steadfast rather than aggressive. A bit of a hero out of Soviet socialist realism but of course not formulaic. His boots do have an incredible shine, though, especially as in life they are always dirty after a shift underground.  The miner’s gaze is powerful, but to me has a bit of the “what’s it to you” seen in many photographs of miners.There is an element of challenge to it.