We are Happy: Vusi Beauchamp 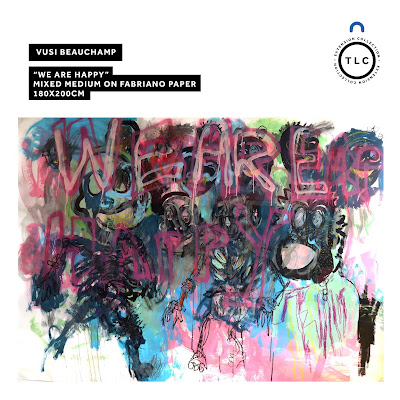 Overview: In a style that curator Gordon Froud compares to street art graffiti, the words "WE ARE HAPPY" are scrawled across the image, atop four grimacing figures.  ("WE ARE" is easy to read, while "HAPPY" is much more difficult to make out.) The three to the left appear to have skeletal bodies, the one of the far right has an open pink mouth reminiscent of colonial or Jim Craw racist 'blackface" iconography. 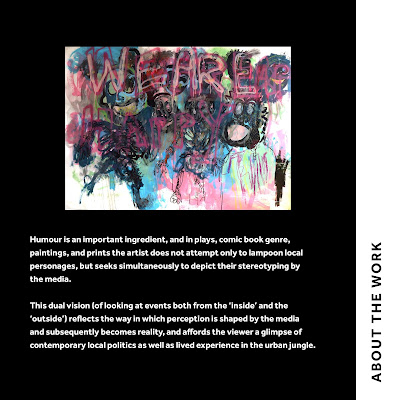 Artist's Statement:   Humor is an important ingredient and in plays, comic book genre, paintings and prints the artist does not attempt only to lampoon local personages, but seeks simultaneously to depict their stereotyping by the media.

The dual vision of looking at events borth from the ‘inside’ and the ‘ouside’ ref;cts the way in which perception  is shaped by the media and subsequently becomes reality, and affords the viewer a glimpse of contemporary local politics as well as lived experience in the urban jungle.


Mark Auslander : Ironically titled, "We are Happy", Vusi Beauchamp's work parodies a long history of colonial racial stereotyping and minstrel iconography that renders people of color as reveling even amidst tragedy. The grotesque allusions to Jim Crow imagery will be difficult for many to stomach, especially at a time when the global COVID-19 pandemic has unleashed a new wave of racism and xenophobia in some quarters.  This may be the artist's point precisely, that the scourge of racial terror and ethnonationalist nativism has been let loose, once more, in our midst. The grimacing figures could thus be read as the fevered delusions of a resurgent global white supremacist imagination. Having resided in the Lansing, Michigan area during the recent anti-Lockdown protests, we were made all too aware of these connections as white marchers displayed Confederate flags, nooses, and automatic weapons,  some declaring that the pandemic was of no concern to people like them, implying the primary victims were urban-dwelling people of color for whom they had no sense of compassion or solidarity.  Today, 31 May 2020, as this painting is released, the world views televised images of mass violence in American cities,  in the context of enormous public protests of police brutality. Much of this violence may be instigated by rightist white supremacist provocateurs, who seek to promote precisely the stereotypes of black people that Vusi's work caricatures. 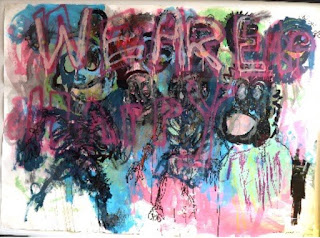 These skeletal apparitions may also directly allude to the early modern genre of the "Danse Macabre" and "Memento Mori," reminders, especially during times of pestilence, that earthly pleasures are fleeting and that Death stalks us all.  We may also in the four figures see echoes of the Four Horseman of the Apocalypse, prophesied in Revelations and other books of the Old and New Testaments. The fourth, pale horseman has often been identified with plague, and that imagery may inform Beauchamp's fourth, lighter figure to the far right, with the gaping mouth of racist blackface stereotyping. The plagues of racism and viral infection are perhaps here conjoined: like proliferating strands of pathogenic RNA, racist memes seems to be be infecting the body politic and reproducing helter-skelter across the world. It is the mission of the artist, Beauchamp may be implying, to represent and denounce this foul pestilence, and stop it in its tracks. 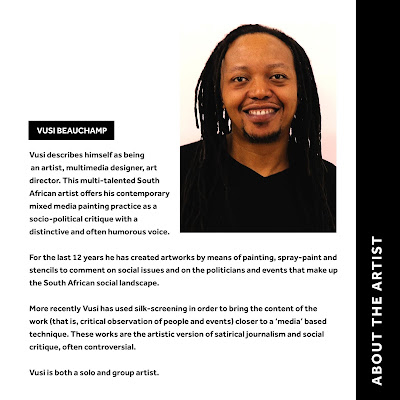 It is perhaps worthy of note that the first two words of the painting's title,  "WE ARE" are spray painted prominently above the heads of the figures, each letter written in outline in a light pigment to ensure legibility. The final word, "HAPPY," is much more difficult to discern, written in a darker hue and covering over the three figures to the left.  Why should this be the case? Perhaps the Horseman, like the physical virus and the virus of intolerance, are resolutely proclaiming their existence: "we are"  The harbingers of death and destruction may indeed be 'happy" and overjoyed by current events, but happiness itself is rather elusive, and easily obscured. The artist may be leaving us with a final question: is it our own happiness that is being gradually effaced by the invading virus, or by pervasive media representations,  or might the joy experienced by these avatars of death itself be fleeing, as humanity unites, admittedly in fits and starts and amidst many failures, in common cause to confront the twin scourges of racism and the pandemic?