New York Times Memorial: A Front Page for the Ages 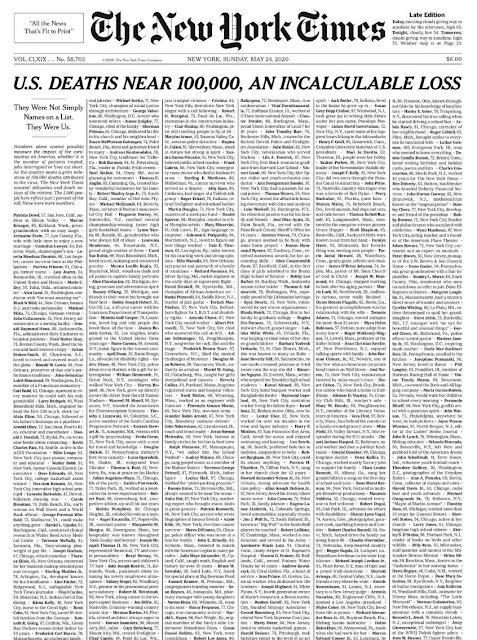 Today, on the Sunday of Memorial Day weekend,  May 24, 2020,  the New York Times front page is devoted to a most solemn memorial. To mark the anticipated passing of the toll of 100,000 lost to the Covid-19 pandemic, there are no images or graphics on Page One. Only miniature, unadorned death notices, amounting to 1,000 souls, representatives of the many lives lost, and a grim reminder of further losses to come.

Note: For those who do not have access to a physical copy of the Times today, an online version of the piece presents the names in  sequence as we scroll through a landscape of people, one thousand figures blackened out with their brief epitaphs beside them. A seemingly endless Book of the Dead.

Mark Auslander: Those of us on the Art Beyond Quarantine team find the Times’ stark cover to be a work of art in itself. As John Grippe writes the Times had been pondering how best to mark the 100,000 toll. One possibility was publishing row after row of photographic portraits of the dead, a strategy which we recall from the paper’s pages after 9.11. In the end, the decision was made to evoke the earlier history of 19th century newspapers, which consisted entirely of one small headline after another. Here each name and a brief summary of a life, culled from newspapers across the nation, is honored in turn.  A field of headstones as it were is evoked through modest headlines, one after another, in simple columns and rows.  The Old Gray Lady, the nation’s newspaper of record, is itself  shrouded in a day without art, revealed as our national graveyard in black and white.

Our anguish at seeing this page is compounded by the knowledge of how many of these deaths were avoidable. Heroic reporting by the Times, the Washington Post, and many other media outlets has demonstrated how the current administration’s incompetence, corruption, and short-sightedness again and again failed the nation and its people. Warning signs and intelligence reports were repeatedly ignored, downplayed, or actively repressed, primarily out of fear of spooking the stock market and thus imperiling the current incumbent’s reelection chances. After a relatively brief period of promoting recommended public health methods, President Trump is clearly determined to catalyze far right populist discontent with the restrictions, and has signaled that the national lockdown should fade away. Most recently, he has declared that churches should reopen their doors forthwith. The calculus is driven partly by the president's desire to shore up his flagging evangelical base and by the logic that the poor and relatively powerless, as Paul Krugman puts it, should “Die for the Dow.” This thinking, as Adam Serwer argues in The Atlantic. is intensified by the sense among many right-wing whites, that communities of color are by far most at risk from Covid-19, and that they are, ultimately expendable in the struggle for economic recovery.

Collecting the Sunday Times from our driveway this morning, the paper seems heavier than I ever remember. Each simple, grim line, distilling a lifetime into a short sentence, is unbearably poignant  One name from each of the six columns:  Marion Kruger, 85, Kirkland, Washington, grandmother with an easy laugh--Bassey Offiong, 25, saw friends at their worst and brought out the best--Frank Gabrin, 60, New York City, emergency room doctor who died in his husband’s arms--Mary Jo Davitto, 82, Thornton, Illinois, people were her hobby--Morris Loeb, 90, Northbrook, Illinois, endlessly curious, never really finished--Helen Silvia 96, Brockton, Massachusetts, known as the “fashionista" in her nursing home.

As the Times remarks in its preamble, “none were mere numbers.”

Reading name after name, epitaph after epitaph, I am reminded of Armando Petrucci’s argument in his remarkable book, “Writing the Dead: Death and Writing Strategies in the Western Tradition” (Stanford University Press, 1998)  From classical times, the act of inscribing words on the tombs or grave markers of the Dead has not simply been  a work of remembrance, but an active opening up of a portal to another world, forging a ritual or spiritual channel between the land of the living and the great beyond.  To write the names of the Dead is to send a message beyond our immediate ken to somewhere else, to implore aid from on high, to seek salvation when all hope seems lost, and to open the inscriber to powerful transformation and inspiration.  In this sense, the Times’ austere front page, and the interior pages that follow to register the human toll, can be thought of as a collective national prayer, an inscribed memorial wall that is a threshold between worlds. This front page is equally, like the polished granite of Maya Lin’s Vietnam Veterans Memorial, a great mirror that reflect ourselves, in all our failings and our strengths, back to ourselves, reminding us of our better angels, and insisting that we do better by all of those, young and old, near and far, who still stand among the living. 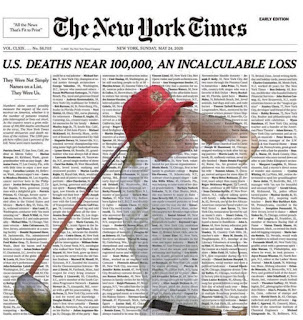 Addendum (5.26.20): The NY Times  front page has now inspired several improvisational internet memes, alluding to the fact that as the nation approached the 100.000 death toll mark, the President was out golfing. In several images circulating on line, he is shown golfing over the front page obituaries.   Here are four examples. 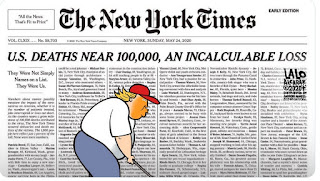 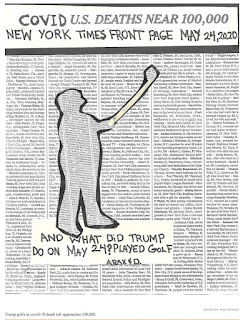 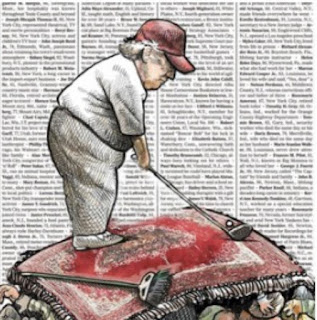 Posted by Mark Auslander at 6:16 AM