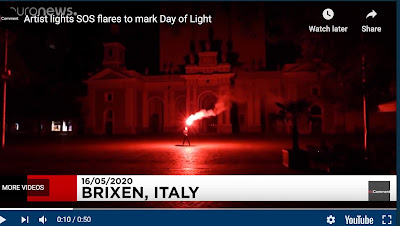 Overview:  As recorded in a widely circulated video,
https://www.euronews.com/2020/05/16/artist-lights-sos-flares-to-mark-day-of-light

Italian performance artist Stafano Cagol on May 16, 2020 just before daybreak set off emergency flares in the Cathedral Square of Brixen (Bressanone). in the midst of the northern Italian region that has been so heavily impacted by the COVID-19 pandemic. The artist explains that he was celebrating the International Day of Light and compensating for the town's regular annual festival of water lights, cancelled due to the crisis.  (It turns out that the International Day of Light, according to UNESCO, commemorates the 1960 discovery of the laser. ) 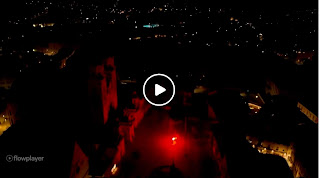 Mark Auslander:  In this performance work, held on the brink of dawn, the artist celebrates the coming of a new dawn as Italy cautiously emerges from Lockdown, warming the hearts of those who have been for so long confined indoors. He presumably understand the fire as cleansing, torching the city center of pestilence.   Perhaps there is a homeopathic dimension to the artist's action: Covid-19 spread, it was often noted, "like wildfire" through the communities of northern Italy. Now, through more controlled flames, the artist marks the containment of the outbreak. He thus signals both an emergency, through the use of SOS flares, and also, it would appear, the imminent passing of the state of emergency.

It seems likely the artist is also referencing the extensive bonfires and fire rituals, evidently pagan- derived, in northern Italy, through which the passage of time and the rejuvenation of nature and community have been celebrated for countless generations.  (Ancient pagan imagery of burned wicker figurines informs the culmination of the annual Burning Man Festival in the northwest Nevada desert, a now global techno-media sensation.) Here, Cagol appears to be tapping into the ancient regional cosmological symbolism of cycles of death and the regeneration of life, through the grand spectacle of fire in the center of the community.

It should  be noted that there are, for some, disturbing undersides to this ritual tradition. To some viewers, the image of a fire in a Cathedral Square will be deeply unsettling, reminiscent, for example, of the 1533 burning of books and manuscripts in the Cathedral Square of Münster by Anabaptists, echoed by the Nazi display in the same cathedral square on May 6, 1933  of "un-German books", or
the burnings at the stake of accused heretics elsewhere in Europe   Fire rites in northern Italy have themselves been interpreted ominously. Most famously, in Fellini's film Amacord,  a wicker effigy of La Vecchia (old woman), normally burned during Lent,  is consigned to the festival flames, in a dense allegory of fascist violence.

Perhaps, in pondering the potential levels of meaning in Cagol's fire rite, we should regard  this moment, as humanity emerges from the first wave of Covid-19 as a kind of test. Will we respond to this modern plague, like many of our ancestors, with anxious intolerance and xenophobia, seeking to expell supposed internal others to safeguard ourselves? Or will we light a flare of hope and compassion for all to see, sparking a new era of generosity and tolerance in humanity's next chapter?

Ellen Schattschneider: As with other works of digital recorded performance during our strange historical moment, Cagol's production poses conundrums about liveness, reproduction, and the "aura", in Walter Benjamin's terms. Here we have an ostensible celebration of the imminent return to normalcy, staged in what would ordinarily be the beating heart of the polis, but this previously communal space is now entirely devoid of people other than the flare-wielding artist himself. The moving images are presumably shot from a drone, so this is a highly techno-mediated undertaking, created not for live audience, as would be the case for an actual festival of lights, but for the YouTube audience and mass media worldwide.  The intended goal may be engender a warm, fuzzy sense of hope and optimism in the global audience, but the actual scenario is still one of intense isolation, as we continue to live our confined, scattered lives through screens. The walls of the cathedral and the other buildings are seen from on high to bask in the glow of a most literal "aura" of red flames, but we are, in a sense, more distant from the initial burst of light, and from one another, than ever before.
Posted by Mark Auslander at 2:39 PM