Overview:  "Pathways of Taxi Hand Sign" presents intricate drawings of South African mini-bus/taxi hands signs, suspended over three background fields of black, white and orange.  In the more monochromatic " The Future We Choose", a water faucet, with a jury rigged nailed employed as a handle, is located above another amalgamation of hands forming deaf hand signs.


Artist's Statement:  Lockdown has provided a lens and an opportunity to change and take action to address climate issues urgently.

Through her artwork Susan Woolf expresses aspects of the lockdown with regards to water scarcity. The focus is on desperately poor communities in South Africa and the frenzy around shared access to water and where social distancing is difficult. The artwork shows a recreated broken tap with a nail and wire replacing the missing tap handle. It symbolises both the inventiveness and desperation to access water.

Selected taxi hand signs - an innovation that grew also out of a desperate need, in this case for transport - are included amongst the other hand gestures. These gestures draw attention to relevant social situations, which align to lockdown. Problems with social distancing echo the situation of gathering around a communal tap to access water. This extends to the taxi industry which exacerbates the problem of infecting others. 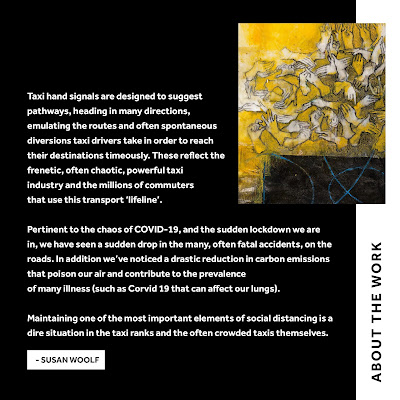 A bat semi hidden, in the artwork, is shaped by gestures. The spread of diseases like Covid 19 are almost always because people have encroached into the territory of animals. Out of 1400 species of bats, it is believed that one bat may pass Covid 19 to humans through an ‘intermediate’ host known as the Pangolin.

Pamela Allara:  In 2004, artist Susan Woolf, who was intrigued by the hand-gestures she saw commuters using to signal to the independent mini-bus ‘taxi’ drivers that they wanted a ride to a given location, began to catalogue them. This process involved her going to the numerous taxi ranks around Johannesburg and surrounding cities and townships, and questioning the commuters and drivers, not only about the sign itself, but what other meanings it may have beyond simply indicating location. As Dr. Molefe Tsele wrote in the forward to Woolf’s “Taxi Hand Signs” booklet (2007): “South Africa has eleven official languages, but in reality, there are twelve. The twelfth is a sign language … the language of commuters.” Woolf’s painstaking research resulted in her 2014 doctoral dissertation, “Taxi hand signs: Symbolic landscapes of public culture,” (Wits University), in which the signs were catalogued and interpreted. She has also created an extensive body of taxi hand sign-related artwork that has been exhibited at the South African Jewish Museum in Cape Town (2016) and elsewhere.

The two artworks Woolf has donated to The Lockdown Collection’s second phase continue her exploration of the expressive potential of hand gestures. Hand gestures are used ubiquitously in daily communication, but the same gestures can have very different meanings in different cultures, potentially resulting in miscommunication. We may want to attach significance to the many gestures found in these two beautiful works, but have to concede that we may well misinterpret what we see. Fortunately, the artist has provided a list explaining the gestures, which is appended to this post. 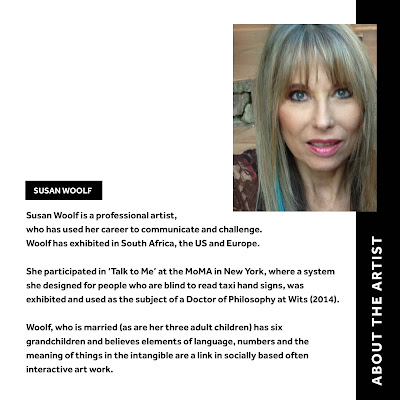 In Pathways of Taxi Hand Signs, the hands are randomly but tightly clustered around a central area, in light orange, while above and to the left, black and white areas are left blank.  This might suggest the frantic nature of rush hour, when taxis are headed in numerous different directions, as well as the crowding in the taxis themselves (the more people the driver jams into his vehicle, the more money he earns.) This clustering of hands suggests stress, (despite what the individual gestures may mean), and further may allude to the inability of the hands/bodies to distance safely. Despite the fact that reduced taxi commutes have resulted in fewer accidents and lower pollution, the forced proximity inside the vehicles continues to risk the spreading of disease. The city of Boston, from where I am writing, has begun discussing plans for increasing pedestrian and bicycle lanes and reducing automobile lanes on streets after the lockdown ends.  The crowding of public transport remains an intractable problem, however. 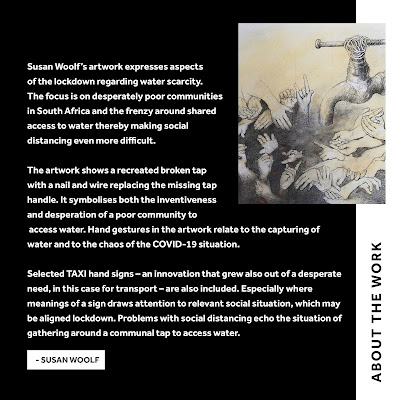 The title of the second work, The Future We Choose, is taken from the book by Christina Figueres and Tom Rivett-Carnac that traces the fatal impact of the use of fossil fuels not only in pollution and natural disasters, but the spread of disease. With the outbreak of the global pandemic, the connection between climate change and disease has become clear. Central to human health is access to clean water, but in South Africa still today, it is often a scarce commodity in townships and rural areas. The improvised repair to the small water tap is indicative of the daily challenge of finding sufficient water to drink, cook and clean endured by the poor, and a metaphor for the fragility of the water transmission system in the country. The hands floating on the dark ground below the tap appear reduced to futile gestures. But are they also forming a community that can potentially work for change? For example, the hand next to the tap with pinky and index finger extended is making the well-known ‘clever’ sign, but it also refers to horns, which as Woolf comments represents for her human interference in nature causing disease and climate change. The gesture in the lower center of a left hand grasping the wrist of a right hand closed in a fist is the sign to Pollsmoor Prison, where COVID-19 has spread rapidly. But the hands directly beneath the top on the far right form a protective gesture, as individuals come together to help each other. In the end, hidden in this bleak image may be hope for positive change in a time when the pandemic exacerbates the access to life-sustaining water. Such change will clearly require all hands on deck. 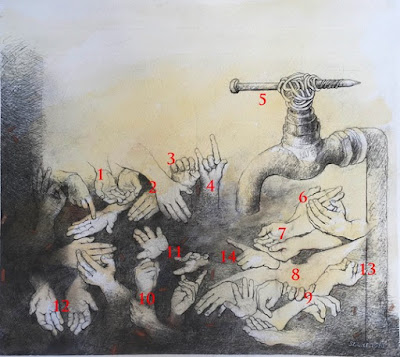 From Susan Woolf: Meanings of gesture and taxi hand signs in The Future We Choose: 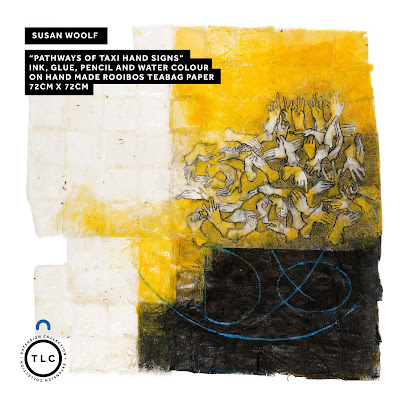 Mark Auslander:   As emphasized by other artists in the TLC project, including Walter Oltmann and Michael Meyersfeld, hands, always meaningful in all human societies, have taken on a powerful new range of connotations during the pandemic crisis. Our hands are potential sites of contagion and infection, and we are enjoined to scrutinize our own hand movements (avoiding, above all, touching the face and shaking hands), washing our hands with soap and water, when available, and sanitizing and wearing gloves when possible.  At the same time, hands remain ever more precious instruments of care and compassion, offering succor to the ill and dying.


Hands signify our common humanity, but also, in Susan Woolf's renditions, function as a poignant reminder of all that divides us. The luxury enjoyed by elite and middle class persons, who can afford to cloiser themselves away in relative isolation during Lockdown, simply is not available to lower income communities, especially in the townships. Social distance is impossible, and access to clean water is highly restricted. Woolf's hands are in intimate proximity to another,  They are, especially in The Future we Choose, intensely beautiful, redolent of the marvelous cultural improvisational creativity of township life, in which a complex semiosis has been experimentally generated across the years.

Although this intricate system of taxi hand gestures emerged long before the Lockdown of early 2020, it is worth bearing in mind that they were developed under a long history of Apartheid, a vast system of formal and informal lockdowns, in which the mobility of persons of color was highly restricted through pass systems, arbitrary arrests and detentions, and labor preference areas that tore millions apart from their loved ones. Operating across more than a dozen languages, with only a few moments to communicate a desired destination, this ingenious gestural system evolved to evade an intricate and often violent system of state control. In this respect, it bears some resemblance to the gestural system created by political prisoners under Apartheid, celebrated in Jeremy Cronin's poem, "Motho Ke Motho Ka Batho Babang (A Person is a Person Because of Other People)":  "Two fingers are extended in a vee/ And wiggle like two antennae./(He's being watched). " Under the most brutal conditions of confinement, Cronin long ago reminded us, extraordinary moments of solidarity were possible, against all odds, without spoken language.  So too for the taxi hand semiotic system Woolf has documented and explored in academic and artistic registers-- a system which, under the current Lockdown, remains only a body memory, a cultural matrix in suspended animation.


There are so many ways, Woolf's work reminds us, in which everyday life among the South African poor remains a dynamic collective aesthetic project that is worthy of celebration. Yet at the same time, these hands, forced so closely together, are shown as painfully vulnerable, potential agents of contagion and infection, deprived even of the access to clean water that should be a universal human right. The hidden image of the bat, formed by the hands, reminds of of the environmental costs of unregulated human expansion into natural regions, costs disproportionately born by the world's poor.

As Pam notes, in the midst of all this terror and tragedy, the hand signs for friendship and love endure. As we ponder the next steps in human history, love may not be all we need, but love is surely foundational to whatever comes next, if we are to forge a better world, near and far.

Posted by Mark Auslander at 6:05 PM