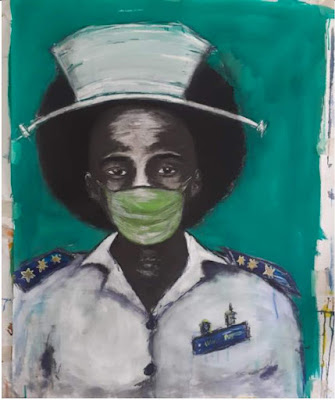 Overview:  Against a green background, a black person of indeterminate gender in a green face mask wears a white nurse's uniform with stars on their shoulders and other epaulets above their breast pocket.  The person has an Afro hair style, with a nurse's cap.  The nose and forehead are illuminated, as if from the flash of a camera or the bright lights of a hospital ward.


Pamela Allara:  Although the word ‘nurse’ is likely to bring up in one’s mind an image of a woman in a white cap and gown, that image is an anachronism, as nurses today are frequently male. Senzo Shabangu’s “The Nurse” could be identified as either male or female, and that ambiguity is important, as the figure’s gender not at issue. What matters is that s/he is a caregiver. The person’s halo of hair is so large that the nurse’s cap cannot be tied in back, but it rather floats in front, looking almost llike a billboard announcing his/her profession. The white uniform is topped by blue epaulets, lending a military look. Even though South African nurses uniforms often have epaulets, the military appearance is also symbolic of the nurse’s resolve and dedication to service. 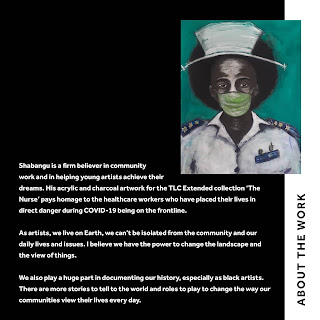 The mask hides the lower face, so we are left with the rather tired but gentle expression of the eyes to probe the figure’s personality. (Recent news stories have reported that in hospitals in the United States, nurses and medics are pinning photographs to their uniforms in order to better introduce themselves to their patients.) Our nurse is backed up against a ‘government green’ wall with strong electrical lighting reflecting off his/her face; clearly our nurse is confined to an institution or hospital which affords limited options. This nurse provides sympathy to others, but is also deserving of our sympathy. 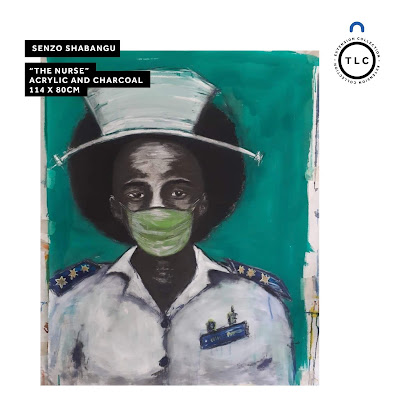 Mark Auslander:  Shabangu's painting may be approached with reference to Georg Simmel's classic 1901 essay, "The Aesthetic Significance of the Face."  Simmel argues that under conditions of disenchanted metropolitan modernity, in which we increasingly are deprived of deep, contextualized knowledge of one another, the face takes on intensified significance, as a privileged site of inter-individual reciprocity and exchange. In particular, Simmel argues, the eyes and associated facial musculature rapidly mirror the expressions of the interlocutor in face-to- face interaction, and come to provide us with a model of the unity of the soul and of our (hoped for) intersubjective sense of connection to one another.

Simmel's insights have been developed in Hans Belting's book, "Face and Mask: A Double History (2017) which explores the history of distortions of the face in the history of art, notably arguing that the portrait painting is a kind of "mask", which paradoxically reveals the subject's inner life in a manner than cannot be normally apprehended.  (As Oscar Wilde famously remarks in The Critic as Artist, "Man is least himself when he talks in his own person. Give him a mask, and he will tell you the truth.")  In the Shabangu painting, the nurse's face is partially obscured by the required protective face mask, yet this act of concealment has the curious effect of overemphasizing her or his eyes, as a "mirror of the soul," granting us a deeper appreciation of subject's care and compassion for the nurse's charges. 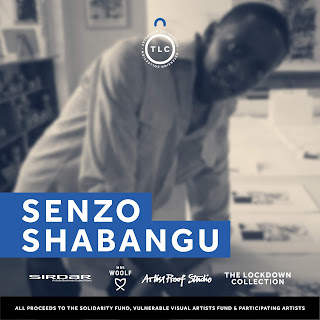 In this painting, the importance of the eyes is particularly emphasized by a curious shape illuminated lighting on the subject's face, above her/his eye sockets and on the forehead, perhaps an artifact of a camera flash in a source photograph.  The shape might recall the Ankh, the ancient Egyptian hieroglyph for "Life," emphasizing the life-saving aspects of the nurse's vocation.  We might read the shape as a rather benevolent figure, with outstretched arm, just above the eyes, compassionately embracing the afflicted. Speculatively, this lightened image could even be read as the presence of an ancestral shade, conveying solace and strength at a time of enormous trial, when so many patients and healthworkers labor in the valley of the shadow of death.


The net effect, even though (or precisely because) we are deprived of direct perception of the nurse's mouth, incapable of seeing her or his smile, we are granted intensified access to their eyes and to all that which binds us to another in our darkest hour.