Overview: Over a scene of tree branches and leaves a semi-transparent letter "V" has been been superimposed, the "V" recalling
the font used in World War II era "V for Victory" campaigns.


Artist's Statement:  “What does the artist do? She draws connections. She ties the invisible threads between things.” I see my creative process as a response to this. I selected what I had at hand. I frequently incorporate found objects into my work, such as photographs and historical maps, thereby creating a multitude of layers revealing and obscuring images and ideas. I encourage the viewer to look beneath the veneer of the artworks, hence the incorporation of the V which represents our triumph over this adversity. It is through this process of disentangling and extracting meaning, that the viewer becomes an active participant in translating the image and threading their own connections and narratives, into the artworks. 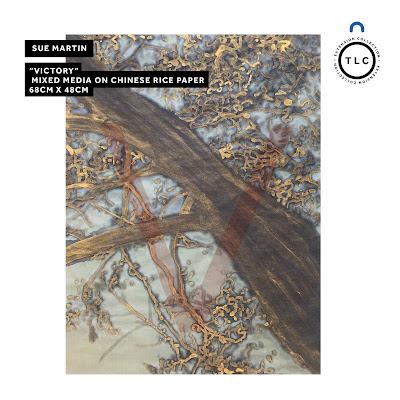 Addendum to Artist's Statement: Maps and naturalist paintings were employed by early explorers as a means of making sense of the unfamiliar territories they encountered on their travels. I utilised my photographs of the Acacia trees (indigenous) to map out my own journey. To assist me in making sense of the virus. This is my way of triumphing over the virus. It is apparent but it does not overwhelm.

For this reason I also worked on imported Chinese rice paper. It is exotic but it also has a fragility. It possesses a translucent quality that allows one to peer through and possibly find meaning by allowing the 'hidden' to be revealed. Ultimately, I would want my work to be viewed as a Victory, where life and nature triumph over this adversity.

Mark Auslander:  Sue Martin's beautiful, translucent thicket invites us into the "forêts de symboles" celebrated by Baudelaire, famously referenced by Victor Turner, in his own book, The Forest of Symbols, a preeminent study of African indigenous cosmology and symbolic meaning, set among the Ndembu peoples of central Africa. Martin densely weaves together a range of environmental and historical associations in seeking to make sense of our current global moment of crisis. 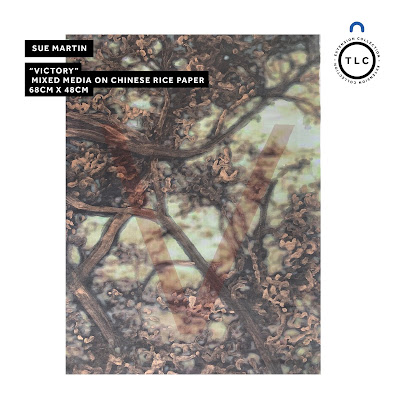 A number of artists have responded to the Covid-19 crisis by evoking the iconography of World War II, arguably the last time humanity faced a crisis of such common magnitude (See, for example, Sylvia Bueltel's re-appropriation of the homefront propaganda posters of the war period ;  Andrea Robinson's similar WWII-themed public health posters and even the use of mannequins in World War II era attire to populate the famous Inn at Little Washington in Virginia during the Lockdown period.  Sue Martin continues this strategy by inserting over her forest thicket a  "V" iconic of the Allied "V is for Victory" campaign during the Second World War.

Although Martin emphasizes the theme of Victory, her "V" more ominously puts me in mind of the Virus itself, which has terrorized humanity in recent months.  I find myself thinking of the earlier Latin term "virus," the flowing poisonous sap of plants, from which the modern word virus is derived. In Martin's image, the proliferation of vegetative growth could be read as potentially dangerous, exuding a viscous venom or poison that seeps through this densely tangled scene; in this sense, the golden leaves might be evocative of the novel coronavirus itself, or the body's hidden channels through which the pathogen travels, replicating itself and seeking, ultimately, new hosts to infect. 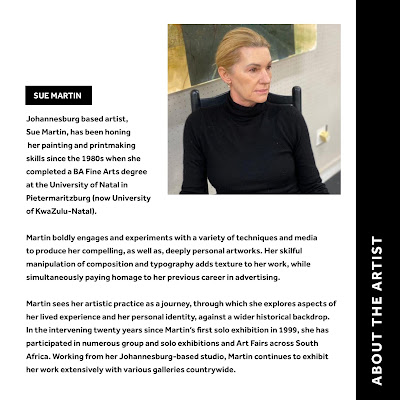 Alternately, the intricate pathways described by the branches and foliage could be read as a kind of map for us to follow as we search for a cure or a sustainable way to live, long term, with this pathogen.  The V, in turn,  may be  resonant with the aspiration that the world will in time triumph over the pandemic. Thus the victorious "V" seems to parallel the crooks in the background tree branches, which might provide a natural model for future hope.


In this connection, it is noteworthy that the artist identifies the tree seen here as a member of the Acacia family.  Tradition has it that the ancient Israelites constructed the Ark of the Covenant out of acacia wood, and these tree species have profound resonances in many different world cultures. Acacia are known to have complex phytochemical properties that naturally repel pathogens and pests,  and thus their barks and roots have been extensively incorporated into indigenous Southern African pharmaecopia for generations (Maroyi 2017; Ali 2011, Meena 2010).  These natural medicinal attributes may be important models for us in our current predicament.

In my own research as a social anthropologist in rural eastern and southern African communities, I've often been impressed by the intricate byres and enclosures created out of thorny acacia branches to protect livestock against wild predators. In the 19th century, these branches were also used to create stockades, protecting communities against slave raiders. there is thus a long history of understanding acacia as defenders against all manner of threats, visible and invisible.

In many indigenous African societies, trees are intimately associated with ancestral shades. In my own research in eastern Zambian Ngoni communities, I've often seen livestock wander into thick, shaded groves of trees, including acacia, which is invariably regarded as a blessing. No human herder may enter the grove to retrieve the stock: cattle are allowed to seek shelter there, and return out into the open on their own schedule, having entered into communion, as it were, with benevolent spiritual presences.

In the Western tradition, since classical times, wandering alone in a forest grove has signaled moral confusion and spiritual peril, and that emerging from the thick wood has been understood as heralding spiritual growth and triumph.  In that sense, the artist may be initially inviting us into a dense thicket of confinement, uncertainty and anxiety, redolent of the Lockdown and quarantine, with the ultimate promise, of light in the distance, framed by the ephemeral "V", over  which a better dawn might someday rise.

Posted by Mark Auslander at 7:46 PM