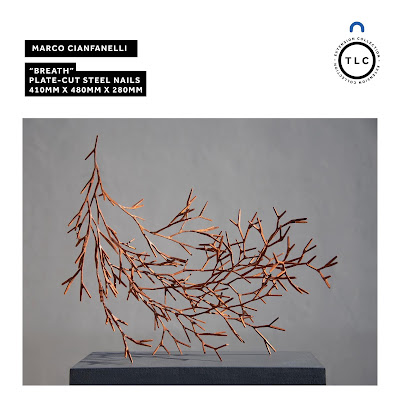 Overview:   In response to the current Covid-19 crisis, South African sculptor Marco Cianfanelli has fabricated a free standing metal tree, produced out of small nails. The artist writes, "this sculpture is constructed from cut-steel nails that are all the same size. Each nail is connected to 2 more nails and this is the principle by which the form has emerged and evolved exponentially." The work develops motifs and techniques Cianfanelli explored on a larger scale in his commissioned monumental installation, "Matter," hanging in the atrium of the Deloitte company.

Artist's Statement:  In the days leading up to the start of the lockdown, I completed a year-long project, a large suspended sculpture titled Matter: Within the context of the Covid-19 pandemic, my thoughts on this work took on a more pointed and focused meaning, prompting my response to the TLC call to artists. I have included here some excerpts from my statement on Matter: 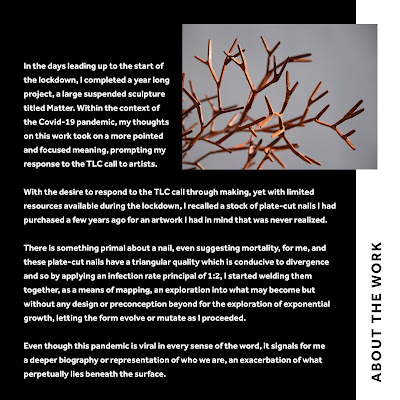 "A structural manifestation of the complexity of our existence and interdependence, Matter is a layered exploration, a suspended constellation of ideas relating to origin and resource, action and interaction, to interdependence and accountability, expression and identity, to Humanity and our collective role in shaping the future...Inspired by the dendritic forms of the branched projections of our neural system, Matter explores the sensory and cognitive networks that exist within ourselves, yet it also represents the networks of various forms that we exist within. It is pigmented with coal powder, symbolising our shared origin, our connectedness to each other and the environment. The numerous dendritic spikes that emanate into space from each node, seeking new points of connection, refer to the future. The artwork is a self-supporting structure, a body of sorts, corporeal yet sublime in its seemingly weightless suspension ins pace. There is, however, something precarious about this suspension, a tension of cause and effect that points to an inherent vulnerability...The title of the artwork itself, Matter, suggests multiple readings, referring to our relationship to the physical world and its resources, indicating the importance of people, collectively and individually but most importantly, it is intended as a prompt for us all to make a difference that matters. "

With the desire to respond to the TLC call through making, yet with limited resources available during the lockdown, I recalled a stock of plate-cut nails I had purchased a few years ago for an artwork I had in mind that was never realized. There is something primal about a nail, even suggesting mortality, for me, and these plate-cut nails have a triangular quality which is conducive to divergence and so by applying an infection rate principal of 1:2, I started welding them together, as a means of mapping, an exploration into what may become but without any design or preconception beyond for the exploration of exponential growth, letting the form evolve or mutate as I proceeded. Even though this pandemic is viral in every sense of the word, it signals for me a deeper biography or representation of who we are, an exacerbation of what perpetually lies beneath the surface. 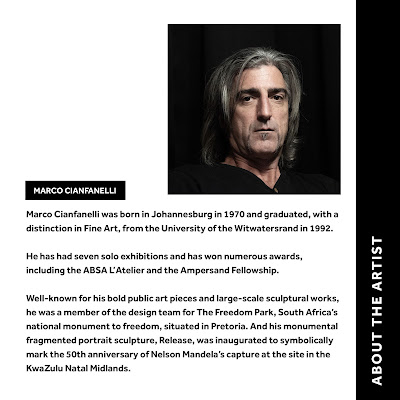 Pamela Allara:  Known for his monumental, fragmented portrait sculpture of Nelson Mandela, “Release” (2012) at the Nelson Mandela Capture Site in Howick in the Zwa-Zulu Natal Midlands, Cianfanelli has consistently sought a new commemorative language for his public installations, one that is anti-authoritarian, interactive, and avoids the bombastic. In his statement for the TLC Extension Collection, Cianfanelli refers to his recent large-scale suspended sculpture, “Matter,” as referencing in the context of Covid-19 not only the body’s vulnerability but our interdependence, “our collective role in shaping the future.” His working method of welding together individual metal parts would seem to support such an interpretation.

Initially, the title of his sculpture, “Breath,” is somewhat confusing, as the work seems to resemble in both color and form the branch of a tree, with its projecting twigs. Certainly the concept of exponential growth which the artist cites can be applied to a tree’s natural growth. And trees do ‘breathe,’ in the sense of both using and releasing oxygen to make or split glucose to sustain their lives. But the title requires that we set aside the idea that the sculpture represents a tree branch, as a tree, lacking lungs, cannot emit a breath.

Human breath is invisible, ethereal, but the sculpture “Breath” is constructed from the hard, plate-cut nails Cianfanelli had in his studio. This pronged exhalation looks as if it could be caught in the throat, or when released, might wound whomever is in its path. This primal action, which insures our continued existence, has become, in the time of the pandemic, a weapon. But viewed another way, each prong supports another as the branch spreads out in space, metaphorically becoming a community that is working/breathing together. 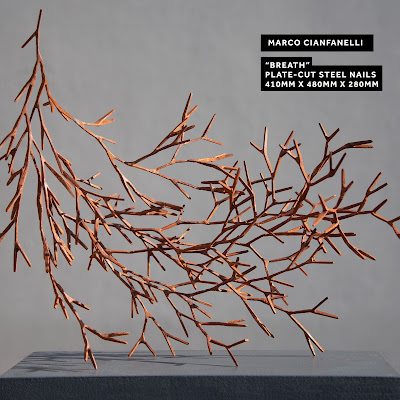 Mark Auslander:  Marco Cianfanelli's "Breath" homeopathically encompasses the pandemic while also offering a measure of hope.  Emerging out of his prior work, "Matter," which evokes the dendritic structure of the nervous system--and the branching structure of  the internet, our late modern simulated global nervous system-"Breath"parallels the anatomy of the human lungs, which all of us under the current crisis have become acutely aware of.  Each breath of air travels down through passageways (brochi) and then into increasingly smaller branches (bronchioles), terminating in microscopic air sacs (alveoli) through which life-giving oxygen is transferred to our red blood cells. These tiny pulmonary passageways, we have all learned, are highly vulnerable to attack by SARS-CoV-2 virus,  which can also lead to accelerated clotting of blood cells, leading to strokes and other major health crises.

Under conditions of our current global anxiety, "Breath" may remind us of the labored breath drawn by advanced sufferers of the novel coronavirus, who are at times consigned to the terrors of intubation and mechanical ventilators, unable to breathe on their own. Under conditions of global Lockdown, even those of us who are not physically ill may undergo panic attacks in which our breath becomes more intense, rapid, and insufficient, as we are viscerally aware of our confinement and the invisible enemy that seems ubiquitous.  None of us, at the present moment, can take "breath" for granted.

The use of nails connected to more nails may emulate the spread of the virus, and the piece could thus be read as a map over time of epidemic proliferation.  Yet, as a tree, an ancient symbol of life and continuity, the assemblage ultimately seems to signal a triumph of life over death. There may even be a gesture to the tree to which Jesus is believed to have been nailed, during the crucifixion, an image read by Christians as promising life everlasting.

As the artist suggests, the rather random process of creation of the work can also be thought of as a hopeful mapping of the unknown territory ahead--as we begin, tentatively and in fits and starts, to imagine a post-pandemic era.   All this returns  us to the foundational meanings of the work's title, "Breath." The primal breath of Creation. The first breath drawn by a newborn.  The respiration by trees that provides oxygen to all of us, even, especially, at our hour of greatest need.  Might this delicate metallic tree perhaps be evocative of a new World Tree, a microcosmic model of a universe in a state of becoming? A prayer in material form that all of us might learn, together and in solidarity, to inhale and exhale in concert, gently blowing life into a better world yet to be?