Overview: Reminiscent of recent photojournalism of miles-long queues for food relief in South Africa, Themba Khumalo's panoramic drawing shows a long line of at least fifty people, many stooped over, stretching back to the horizon, under a dark ominous sky and rolling storm clouds.  To the right, two electrical power pylons tower above those in line, with two other towers visible in the distance, electrical lines strung in the background. Several low trees are visible along the horizon line, and several structures, perhaps lighting towers, reach towards the sky. In the middle of the image the dark cloud descends closer to the earth, a bit like a finger pointing towards an electrical tower. 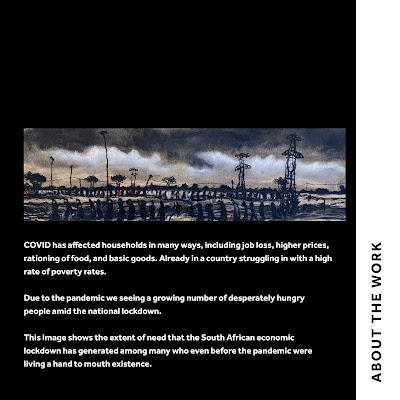 Artist's Statement:  Covid-19 has affected households in many ways, including job loss, higher prices, rationing of food and basic goods. Already in a country struggling with high poverty rates, we are seeing more particularly those in  the middle class who are in a high risk slipping into poverty. Due to the pandemic we are seeing growing numbers of desperately hungry people amid the covid-19 national lockdown. This image shows the extent of need that South African economic lockdown has generated among many, who, even before the pandemic were living a hand to mouth existence. 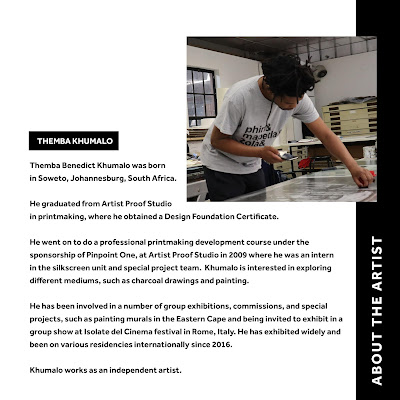 Pamela Allara:   A graduate of Artist Proof Studio in Johannesburg, Themba Khumalo often uses coffee as a medium to create dark, desolate landscapes with glowering skies that create the emotional equivalent of often desperate lives of those living in rural areas or dispossessed from their homes. In this drawing, it is difficult at first to see what we are looking at. The long, narrow, horizontal format of the work can make it hard to discern the subject. We are outdoors, in the middle of nowhere, and there are vertical rows of what? people? plants? The distance from the scene and the lack of definition in the figures do not help us to identify what we see; we are dependent on the print’s literal title: “Waiting for Food Parcels” to direct our attention. The poignance of this work on paper stems from just this lack of definition. There are no individual faces, no sense that these are humans at all; they may as well be lambs on their way to the slaughter. What we have here is not only the enormous number of people who are in dire need, but the point of view of the South African government: they are anonymous, distant problems, numbers to be put into a report that may or may not be acted upon. If we could see just one of them as human, everything could change. But Khumalo will not grant us that hope. The line will be endless because meaningful, timely support is lacking.

David Coplan: The lowering rain clouds, covering the entire horizon, provide a dark and menacing presence for the entire scene. They are set off in superb contrast to the light blue segment of sky shining thinly just below, a seemingly odd but in reality common feature of gathering storm skies on the South African highveld.   Punctuating this lighter layer are decrepit power pylons and solitary wind-worn trees that resemble malevolent guardians out of some “War of the Worlds”. Below them is the sharp hairpin of human figures in a packed queue, lined up over a rough, uneven patch of earth, bowed down as if by the press of Nature’s power.  Will they reach their goal before the heavens descend upon them? No they will not. 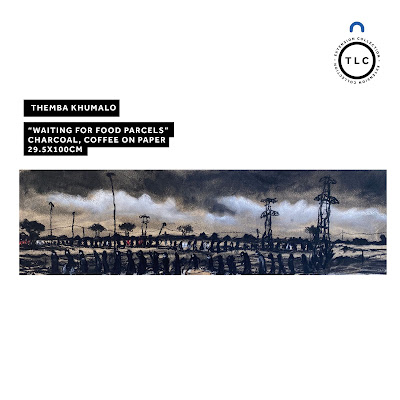 David Bunn:  Like those on the West Bank and in Gaza, the poor in South Africa have always been subject to differential authority from on high, whether it be apartheid’s high-gaited riot vehicles, the elevated freeways passing over rows of flimsy informal shelters, or the ubiquitous high mast surveillance lighting towers, with their unforgiving, unreachable nighttime glare, that still dot the landscape of townships.

Themba Khumalo’s Waiting for Food Parcels is reminiscent of the slow parades of the peasantry, or dispossessed, in early William Kentridge landscapes such as Zeno at 4am. Unlike the ghosting and palimpsests we see in Kentridge, however, Khumalo’s charcoal scene uses an entirely different figuring of affect: the world around the deathly parade of figures seems to be melting, or distorted, like the view through a lens covered in Vaseline. Sky and pylon bend sympathetically to the weight of the human figures themselves, in this endless round.


Mark Auslander: In addition to the marching figures of William Kentridge’s 1999 Shadow Procession (see Auslander 2003)  and the work mentioned by David, Khumalo’s image calls mind Kim Berman's series of Mid-Rand prints from the early 2000's, depicting power lines across a fire-swept highveld landscape (Allara 2010). These panoramic works by Berman, with whom the artist studied at Artists Proof Studio, were largely devoid of human presence, but now the pylons preside over desperately hungry people, seeking food relief under the precarious conditions of the national Lockdown.

David reads the high vertical lines as township lighting masts; I wonder if they might be lightning strikes or even evocative of the piercing spikes of the coronavirus, which have so terrorized our world. Whatever they are, each vertical formation in the drawing, including the food-seekers and the electrical towers,  is gaunt and drawn. The power or telephone lines along the horizon seem thin and storm tossed.

During the anti-Apartheid military struggle, power pylons were targeted by Umkhonto we Sizwe, the military wing of the African National Congress, as (largely symbolic) military targets, potent signs of the Apartheid superstate. Now, the pylons themselves look skeletal and decrepit, echoing the conditions of the starving men and women trudging below.  Perhaps even the teetering pylons, which ought to feed the national grid and economy with pulsations of energy, are themselves waiting patiently for nourishment during these lean times.