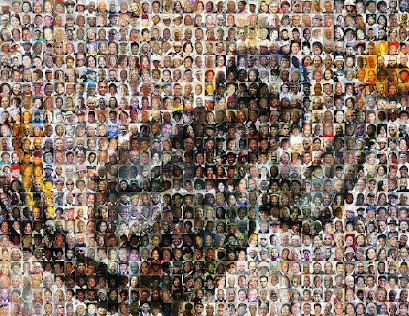 Collage of 900 faces of victims of Covid-19 in Detroit

Background:  Deadline Detroit reports on a moving memorial project on Belle Isle in Detroit:   900 signs, bear the enlarged photographs of those lost to Covid-19 in the city, have been placed along the Strand on Belle Isle, as silent memorials to the deceased.  The project was organized by Michelle Riley, Detroit's director for arts and culture.The artist Eric Milliken has created, as the cover for the commemorative program given to family members, a collage created out of thumbnails of the 900 photographs. The composite forms an image of a figure, based on Detroit's iconic sculpture, The Spirit of Detroit, by Marshall Fredricks (dedicated in 1958). 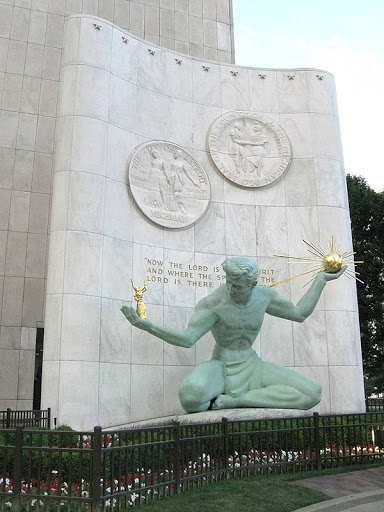 Artist's Statement/Press Release:  As a memorial tribute to the 1,500 fellow Detroiters lost to COVID-19, artist Eric Millikin has created a montage of portrait photos of those Detroiters, with those portraits together forming a large-scale rendering of the “Spirit of Detroit” statue. This artwork will
be part of the City of Detroit’s Aug. 31 memorial at Belle Isle State Park, the nation’s first
citywide memorial to honor pandemic victims.

Millikin created this montage from nearly 900 photos representing a majority of the
1,500 Detroiters lost to the virus so far, between March and August 18th. Surviving family
members provided each of the images of their loved ones. These photos include
wedding photos, high school senior pictures, vacation photos, photos at Detroit sports
events, and family photos showing multiple family members who’ve been lost to the
coronavirus.

“It is my honor to create this for our people of Detroit,” said Millikin. “This has been an
absolutely staggering, heartbreaking loss that this city will feel for years to come.” 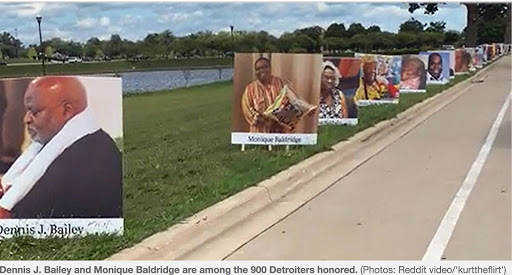 Each family will be able to see Millikin’s montage on the cover of a commemorative
program booklet for all families that attend the City's Memorial Drive on Belle Isle on
August 31. The individual family photos that make up the montage will be displayed as
nearly 900 billboard-sized photos around the island. The public is asked to visit the Island
to see the photos next Tuesday and Wednesday, to allow families to mourn on Monday.

Eric Millikin is a new media artist based in Detroit and Richmond, Virginia. His work has
been exhibited internationally, in museums and galleries from Detroit, Denver, and Dubai
to San Francisco, Scotland, and South Korea. His artwork has been featured in WIRED,
USA TODAY, Ripley's Believe It or Not!, and The New York Times Sunday Arts section.
Mayor Mike Duggan has declared August 31 Detroit Memorial Day, a time to remember
those who did not have the funerals and home-goings they deserved.

For more details of the Memorial Drive, see https://detroitmi.gov/news/city-providesdetails-
august-31-memorial-drive-commemorate-1500-detroiters-lost-covid-19 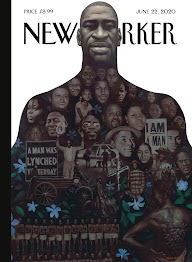 Mark Auslander:  As in Kahir Nelson, "Say Their Names" (The New Yorker cover of June 22, 2020), Eric Millikin has chosen to compose this searing image of a single body out of the faces of the dead. Both works may draw on Abraham Bosse’s frontispiece of Thomas Hobbes’ “Leviathan,” (1651) an etching in which the torso of a giant sovereign is composed of the faces of hundreds of persons.

The choice of the "Spirit of Detroit" figure is especially appropriate, given that the original statue holds in his right hand a family symbolizing human relationships, precisely the bonds that have been shattered through the continuing pandemic of 2020. In Millikin's collage, Spirits of Detroit, the golden family held in the figure's right hand seems to dissolve into the surrounding faces, all testimony to the families that have been violated by the sudden departure of their loved one. 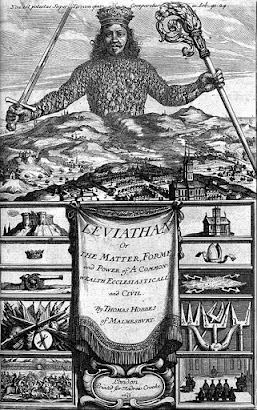 Millikin's figure is clearly a black male, which is appropriate given the tragic disproportionate impact of Covid-10 on communities of color.  Unlike the Fredricks model, this figure seems to be bent over in grief. The collage form, creating a single body out of many images of the Dead, is a particularly poignant reminder that this pandemic, intensified by an irresponsible national leadership notably unsympathetic to minority-majority urban areas, has been felt collectively and not only individually. The entire body politic is turn asunder, feeling the full weight of sorrow that seems to go on without end.

The original Fredricks statue depicts an unclothed white male torso in the tradition of Greco-Roman sculpture.  Milliken's choice in Spirits of Detroit to shift the unclothed torso to that of a black male would seem to carry a new set of valences, including the long-term historical legacies of enslavement. As Tiya Miles and others have documented, hundreds of Native Americans and African Americans were enslaved in the Detroit region from the early 18th century onwards, and enslaved labor was foundational to the city's early political economy.

As Adam Serwer argued in his much noted column in the Atlantic, the Trump administration's anemic response to the Covid-19 crisis can partly be explained in terms of the nation's long term "racial contract," the implicit promise of racial hierarchy safeguarding the privileged position of many whites, at the expense of people of color. As it became clear in Spring 2020 to the administration and its supporters that disproportionate fatalities were being experienced by black and brown persons,  the Federal commitment to active suppression of the pandemic flagged correspondingly. By mid-April, President Trump tweeted in support of the overwhelmingly white opponents of masking and quarantine, who had rallied in Lansing, Michigan's state capital: "Liberate Michigan"--a moment that retrospectively marked a turning point, as Red states quickly hurtled towards rapid reopening and as it became clear that there would no systematic Federal policy on masking, testing, PPE access, and coordinated healthcare in the face of mounting death tolls.

Hence, we may read the outstretched arms in Millikin's central figure as rather different than Fredricks' earlier (1958) Spirit of Detroit. The original sculpted figure held up the golden sun and the family, in a spirit of unalloyed optimism. These new outstretched arms might be stretched out in a latter day crucifixion or raised in supplication, for all those who have been lost and who are in peril, demanding urgently that their names and their stories be remembered.  At the close of a long summer of #BlackLivesMatter mass protests, this new Spirit of Detroit  appropriately takes multiracial form, created out of the beautiful visages of the recent Dead, as the city, rising once again, insists that we say their names and honor their enduring presence.

Press accounts of the Memorial Drive: