Overview:
Cecilia Concepcion Alvarez’s large painting (49”x38.5”x2”) Con Las Esperanzas de Vida, presents a mother with several children, looking beyond us with eyes that seem empty of hope, in spite of the title of the painting, “With hopes of life.” They convey stoicism and deep sadness. Each one has a slightly different direction to their steady gaze, but all but one face us with their bodies, but do not see us.  Behind them are the outlines of falling female bodies and pink and white crosses.

Artist's Statement by Cecilia Concepcion Alvarez: “The pink crosses are about the continuing femicide, poverty and death that they are leaving in their home country. Only to find another version of violence in this country. In the corners are architectural drawings of gated communities parks and natural landscapes. There is fencing to keep The “others” out.  On their clothing I have images of other species in nature. I use this to convey that these people that ICE is trying to keep out, come from societies who are the protectors of nature and our connection to the natural world.  If we, The industrial societies, were not encroaching on and exploiting The wild spaces and The traditional homelands of these protectors, the industrialized societies would not be exposed to viruses like Corvid 19.

In this piece I attempt to spotlight the horrific conditions that refugees from violence suffer in detention centers.  Due to the current pandemic, the close quarters and inhumane treatment in ICE detention centers, asylum seekers are an exceptionally vulnerable population.  ACLU and other Immigration Rights groups are demanding the release of asylum seekers.  They have not committed any crimes and should not be incarcerated.

We the American taxpayers subsidize these for profit detention centers with our taxes.  These detention centers predominantly incarcerate refugees from Mexico and Central America.  These people are held indefinitely in deplorable, dehumanizing conditions and subjected to the same type of violence they were fleeing from in their home countries.  These peoples’ migration has been spurred by the violence created by USA drug addiction, arms sales and USA policies/CIA/Corporate destabilization of their governments.
In order to heal the wounds of capitalistic colonialism, we need to be honest and interested in creating a discourse and action plan that confronts the violence.  We need to examine our part in creating this sorry state of affairs.

In my artwork I attempt to bring to light the parts of our society that are rendered invisible/without value;   in a visual vernacular that does not use violence as a symbol of power/excellence.  Each person held without legal recourse has a story and a reason to flee.  They come here with the hope of life.”
Susan Platt
Cecilia Concepcion Alvarez was born in National City, California. Her mother is Mexicana and her father is Cubano. Cecilia was raised between San Diego, California, USA and Ensenada, Baja California, Mexico. This cultural and political mix inspires much of her work.
Alvarez is a self-taught artist. Her work reflects her perspective on being a Chicana/Latina. She is primarily a painter who has also created large public art. She has worked extensively with youth in creating murals and cultural awareness.

Alvarez is committed to creating discourse through her art, on issues of entitlement, poverty and who is expendable in our collective. She hopes this discourse will create a new and healthier perspective on what is beauty, power and important to our societies
During the last few weeks, the residents at the Northwest Detention Center have staged multiple hunger strikes and work stoppages. Detainees have always been treated like slave labor, paid one dollar a day to do the cooking, cleaning etc, now they have the virus to confront in their crowded conditions. In one recent protest, they spelled SOS with their bodies on the ground ( photograph below). 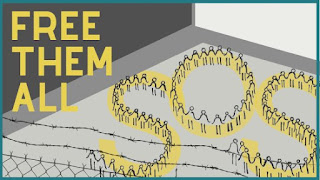 As Cecilia says, these people have not committed any crime.

The Present Crisis
The links above speak of the demand to free the detainees. Inside high rates of death from COVID 19 are inevitable because of the impossibility of following any of the standard guidelines of masking and distancing, there is no protective covering. And this is in addition to the entirely inadequate health care that is already in place in these facilities.

Detainees have always been exploited for profit, now the capitalists running these privately operated facilities are killing people as well.

In the painting by Cecilia Alvarez, we see the desperation of those on the outside who are also suffering from fear, and isolation from loved ones. We see this supported in the La Resistencia NW facebook video, in which family members speak of their feelings.

Cecilia speaks of migrants coming with "the hope of life." The film Which Way Home by Rebecca Cammisa, focuses on the child migrants from Central America who hope to reach the US, mainly traveling on "the Beast" a freight train. We understand immediately what "the hope of life" means to these children, aged 9 - 14, they hope to reunite with their mothers, they hope to get a job and send money back to their families, they hope to rise above the immobility of poverty in their village, they hope to escape violence ( that aspect is not covered in the film). 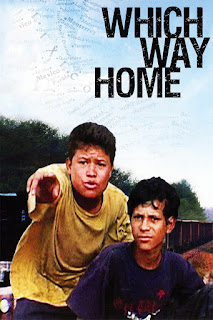 In the current environment of COVID 19, migration is at a halt, people are even reverse migrating, as the dangers of the crowded shelters, the denial of all asylum laws as the Trump administration uses the pandemic to wholesale deport tens of thousands, the horrifying treatment of children detained in the US ( the environment shown in the film, completed in 2009 is far better than the current cages with space blankets). That means they are without hope, they must accept poverty, lack of opportunity and in many cases extreme danger from drug gangs. For these migrants, movement is opportunity, immobility means poverty, kidnapping, and death.


Detention Watch Network is demanding release as the lack of healthcare is leading to catastrophe.
https://www.detentionwatchnetwork.org/sites/default/files/reports/DWN_Courting%20Catastrophe_How%20ICE%20is%20Gambling%20with%20Immigrant%20Lives%20Amid%20a%20Global%20Pandemic.pdf

Mark Auslander:    In 2016, Cecilia Concepcion Alvarez’s painting “With Hopes of Life” (Con Las Esperanzas de Vida)  was the centerpiece of the exhibition “Liberty Denied: Immigration Detention Deportation,” which Susan Platt and I co-organized at the Museum of Culture and Environment Central Washington University, Ellensburg, WA.  (The work was most recently displayed in March 2020, in Ellensburg's Gallery One, just before the shutdown.) As Susan suggests, this powerful painting speaks to us anew during the Covid-19 pandemic.  The crosses and chalk body outlines on the landscape behind the figures, initially evocative of the unmarked graves scattered across the US-Mexico desert borderlands, now serve as haunting reminders of lives lost or imperiled by the novel coronavirus within immigration detention facilities  With our present-day eyes, we might now be inclined to read the crosses not only as marks on a map, but as viruses floating in the air, threatening all those within densely confined spaces, including spaces of detention and unsafe work environments. (The Yakima Valley in central Washington state is now the most dangerous COVID-19 hotspot on the West Coast.)  Even the colored circles in the painting's two upper corners, which once signaled gated communities closed to migrants, take on new meanings, reminding us of those who through race and class privilege are relatively protected from the full brunt of the pandemic.

It is a strange feature of our present moment, as politicians and media personalities endlessly proclaim “we’re all in this together,” that the faces of those most threatened by the pandemic, especially those incarcerated in correctional and immigration detention facilities, as well as New Americans laboring in the food industry, are so systematically eclipsed or erased from public view.

The current celebration of frontline workers is laudable, but that should never be at the expense, especially in a nation of immigrants, of witnessing and celebrating those who have traveled here in search of a better life. Instead, the current administration has used the pandemic as a cover for accelerated deportation and denial of the universal right to asylum. Political leaders in areas that depend on the undercompensated food production labor of New Americans are often, perversely, calling for immediate relaxation of social distancing policies.   In our more cynical moments, it even seems to us that those in power are inclined to let the virus do the dirty work of ethnic cleansing, behind wire fences and closed doors, ravaging those whose bodily defenses are already compromised from histories of poverty and violence, the cross border journey, and poor treatment during confinement or at work.

As in 2016, I remain impressed that Alvarez’s reference to “Vida” is not merely about what Agamben terms “bare life,” the minimal conditions for biological survival. Her powerful female figures, most gazing unflinchingly and directly, are presented with great dignity and a vibrancy that speaks to proud indigenous and national heritages. (Susan read the figures' gazes as look past the viewer; I am inclined to apprehend them look both at us, and through us.) Their garments shimmer with elements drawn from the natural world, hinting at a profound life force that overpowers the monochromatic background of the desert deathscape. Their eyes confront us with immediacy but with composure, even a sense of sacred serenity.   The central maternal figure nearly leaps out of the canvas, a protective presence infused with the long history of votive paintings in Latin America, offering a compassionate vision of hope even in the darkest of hours.

Amidst the endless statistics and mathematical modeling with which we are bombarded each day, Alvarez’s work re-emerges as a powerful reminder of what is now at stake.  Our task is not only to contain the pandemic and provide each person with the basic conditions of health and physical security, the rights denied to those who now form SOS with their own imperiled bodies.  It is equally to return these powerful, uncompromising gazes, to see in each and every individual the light, and the unquenchable aura of life in its deepest sense, that is our common birthright, on every side of the walls, fences and borders that arbitrarily divide us.
Posted by artandpoliticsnow at 10:17 PM