A Corpse is not a Customer: Barbara Kruger 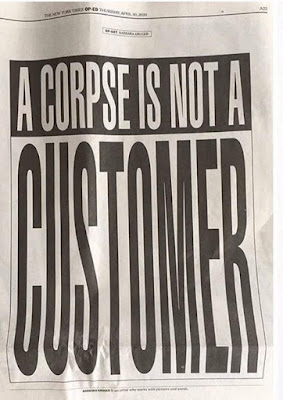 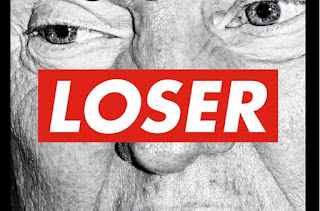 Overview:  The April 30, 2020 print edition of the New York Times features a large work of “Op-Art” by Barbara Kruger, consisting entirely of the six word phrase, in bold face capital letters, “A corpse is not a customer.” The first five words, “A corpse is not a,” are in white letters on a black field. The final word, “customer” are in highly elongated, vertical black letters, on a white field that occupies most of the frame.

Pamela Allara:  Barbara Kruger came to prominence in the 1980s during second-wave feminism, along with Jenny Holzer, Nancy Spero and others who began combining texts with images in order to critique media culture and its power to construct and restrict identities. Still today, she states that “I’m trying to be affective, to suggest changes, and to resist what I feel are the tyrannies of social life on a certain level.” The blunt, assertive texts reference politics but in a way that in effect commands the viewer to ponder recent events and their political and social ramifications. Her use of bold type suggests Big Brother, but the advice is that of a concerned Big Sister.

A work from 2016 is typical in appearing to be understood at first glance, but insisting on pondering a layer of potential meanings. Created after the Presidential election that year, the title LOSER is stamped across a detail of Donald Trump’s face. And in fact, he did lose the popular vote, and so by my lights should be considered the loser of the election. But those unable to avoid hearing Trump’s incoherent statements both then and now might recall that ‘loser’ is one of Trump’s favorite terms, the word he uses to brand anyone he disagrees with. For example, in a 2013 tweet, he boasted, “What my father really gave me is a good (great) brain, motivation and the benefit of his experience—unlike the haters and losers (Lazy!)” (Note 1) So, perhaps the word is issuing from his mouth, branding anyone who questions him.

Barbara Kruger’s newest ‘broadside’ might be considered a response to Trump’s insistence that America must get back to business despite the risks to individual and collective health During the coronavirus pandemic, Trump’s new category of losers include those weaklings who shelter at home, when they should be out patronizing or running businesses. “The LameStream Media is the dominant force in trying to get me to keep our Country closed as long as possible in the hope that it will be detrimental to my election success. The real people want to get back to work ASAP.”  (Note 2)  He himself will break the quarantine to go to a rally in Arizona this week; apparently, the famous germophobe considers himself immune from this particular illness.

“A Corpse is Not a Customer” makes the point about Trump’s lack of empathy (or common sense) directly. Eschewing imagery, Kruger has created a poster that one hopes will appear in the public realm along with others posted by local governments: “Stay Home!” “Wear a Mask,” etc. Distributed nation-wide, the chilling message may actually help save lives.

Mark Auslander; As Pam notes, Kruger’s work of Op-art recalls the genre of the 19th century broadside poster, and does not, strictly speaking, contain an image per se. Yet to my eyes at least, the artist’s design choices evoke a kind of image, and recall the early modern genre of Vanitas, Danse Macabrce, or Memento Mori paintings.  In such works, typically, imagery evoking worldly pleasures was pointedly juxtaposed against a skeleton or corpse, a reminder of the futility of earthly gain in the face of looming death. Such juxtapositions were highly salient during periods of episodic plagues and are hauntingly relevant once again.

In Kruger’s design, the highly elongated letters of the final word “customer” can be read as shaped like a corpse; perhaps we even glimpse a hint of the eye sockets of a cranium. We may be looking directly into an open grave, the fate of tens of thousands more of us if the nation follows the Administration and its allies, rushing headlong towards economic reopening, all in the name of jump-starting the GDP, the Dow Jones, and Trump’s reelection chances.  In keeping with the ironic inversions of the Vanitas motif, the very word that evokes the pleasure of worldly consumption, “Customer,” here is flipped, to become a kind of corpse itself, separated below the surface words, six feet under. a chilling reminder of what may await us, in the anticipated second or third waves of Covid-19.  It is hard not to think of Andrew Marvell’s famous observation, “The grave’s a fine and private place/but none, I think, do there embrace.”