“The world is made of events, not things.”
Carlo Rovelli, The Order of Time

In 2019 Ashraf Jamal wrote an essay about my work, which seems as relevant now as it was then. He stated that, ‘ours is an age in which certainty and fullness of mind, heart and soul, has come to naught. Penn’s works across media, invite an audience to inhabit a world which, in truth, is fast becoming uninhabitable.’ Jamal rightly noted that my works aren’t ‘moral or political theorisations, but sombre invocations. They’re not designed to assuage our fears, but in their muted, quiet, yet unerringly certain manner, ask us to embrace unsettlement, to take that unsettlement to heart.’ 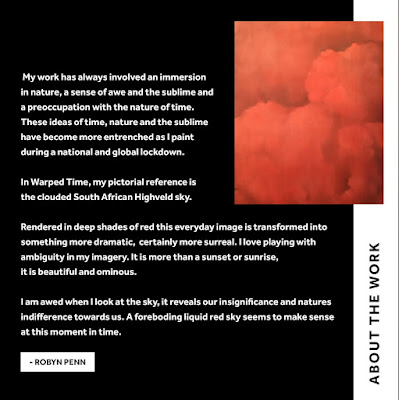 My work has always involved an immersion in nature, a sense of awe and the sublime and a preoccupation with the nature of time. I grew up, and have lived most of my adult life, in Johannesburg where the sublime arrives in the form of cloud formations that pile up daily. Change is ubiquitous as evidenced in this natural process of transformation and dissolution. Time (as Aristotle suggested) is the measurement of change, not of being, but of becoming, made up of events, processes, chaos      and entropy. These ideas of time, nature and the sublime have become more entrenched as I paint during a national and global lockdown.

In Warped Time, my pictorial reference is the clouded South African highveld sky. Rendered in deep shades of red this everyday image is transformed into something more dramatic, certainly more surreal. I love playing with ambiguity in my imagery. It is more than a sunset or sunrise, it is beautiful and ominous. I am awed when I look at the sky, it reveals our insignificance and natures indifference towards us. A foreboding liquid red sky seems to make sense at this moment in time. In a world under duress, where human modes for how we make sense of the world; our notions of time, of place and human connections have been disrupted in an unprecedented way and the only certainties are that we are not in charge and that change is pervasive. In his book ‘Mountains of the Mind’ author Robert MacFarlane writes, “Behind the mountains stretch eons too vast for us to comprehend. They were here long before we were even dreamed of; and watched us arrive and will watch us leave.” 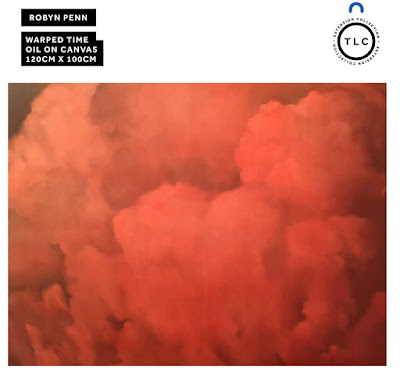 Pamela Allara: Dense cumulus clouds form frequently in the late afternoon over the highveld landscape outside Johannesburg. On clear days, the blue Johannesburg sky can appear vast and endless, truly sublime in comparison to Boston’s skies, which are obscured and reduced by old growth pine and oak trees. Watching the clouds appear and slowly expand in the blue sky offers visual pleasure but also the anxiety about the possibility of one of Johannesburg’s fierce thunder storms.

We do not look up at these clouds, however, so the exhilaration/anxiety we might feel if seeing these formations in situ, is denied. Rather, we are perched above the clouds, an unstable vantage point that suggests a precipitous fall. In addition, the clouds are red, not a soft sunset red, but a red suggestive of wounds or bruises, or even fire. Perhaps these are not clouds at all, but smoke from the highveld fires set every fall to clear the plains for new growth in spring. This deceptively simple abstraction constantly changes our perception as we view it, so that we cannot be certain of either where we stand or what we are looking at. Our feelings of uncertainty are augmented by our lack of control over the expansive formations. During the pandemic, what has become clear is that any confidence we may have had in our ability to control nature is illusory. As Penn has written, Warped Time visualizes “nature’s indifference towards us.” And so, we reach a final interpretation of those ‘clouds:’ an expanding pestilence, indifferent to the devastation it is causing. 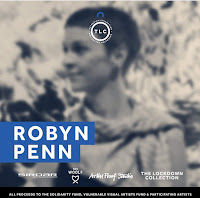 Mark Auslander: Robyn Penn is known for billowing cloud formations, and other complex  protean forms in the process of constitution or disassembly. In the opening webinar for the TLC Extension Collection (5.25.20) the artist notes that as in previous paintings, she worked from her own photographs of highveld skyscapes; in this instance, she has recast the clouds through, in effect, a red lens, in part inspired by a late Degas pastel.

If viewed a few months ago, this image might have been read as a beautiful cloud formation at sunset or of fires and smoke emerging from Vulcan's forge. Now, through our current, troubled eyes, we are inclined, as Pam notes, to discern the miasma of pestilence, spreading across our world, an upwelling of energies that move relentlessly towards us.

Perhaps we apprehend the novel coronavirus itself latching onto and penetrating a cell's walls, injecting RNA strands that will reprogram in effect the host cell's machinery, to begin replicating more pathogenic RNA. We might even be viewing a cykotine storm, the overproduction of immune cells that induces  hyper-inflammation in the lung tissue, leading to serious illness or death.  In such circumstances, the body's immune defenses attack not invading pathogens but cells of the lungs  and potentially other vital organs.  Some scientists have theorized that older persons, with more developed immune systems, are more likely on average to experience these immune-induced inflammatory responses in the pulmonary system, and thus are more likely to suffer higher morbidity rates than younger patients. (There is so much we do not yet understand about this virus.)

In her body of work, Robyn Penn has explored the sublime, the aesthetic and philosophical encounter with wonder and vastness beyond all rational measure or calculation, glimpsing, in some theological conceptions, the face of God moving upon the waters. It would appear that the sublime can manifest itself not only in resplendent vistas of Yosemite at sunset, but in the internal operations of the most dreaded biological processes.

The artist has written that her two principal starting points for this painting were passages from favorite writers.  Theoretical physicist Carlo Rovelli in his book The Order of Time observes: “The world is not a collection of things, it is a collection of events.”  In turn, Robert Macfarlane writes in The Wild Places,  “All travelers to wild places will have felt some version of this, a brief blazing perception of the world's disinterest. In small measures it exhilarates. But in full form it annihilates.”

The title of Penn’s painting alludes to Rovelli’s characterization of Einstein’s model of curved spacetime as “warped time.” A planet orbits a star because the star’s greater mass curves the fabric of spacetime itself, a curving we experience as gravity, so that the planetary body perpetually falls partially inward. Time is not experienced as an absolute constant throughout the universe but is itself organized differently according to the speed and location of the observer: time in effect runs faster where gravity is weaker, and slower when gravity is stronger.  Penn seems to be extending Einstein and Rovelli’s approach to time in a metaphorical register: our experiences of time are altered under conditions of the Lockdown, when we are isolated in our abodes, compressed as it were by the mass of our immediate surroundings, we experience time as particularly elongated.  The slowing of time is presumably intensified by the great “social gravity” of our current crisis, as we are aware of the vast weight of suffering and loss the world over as the global emergency unfolds.

Although,  strictly speaking, a painting is frozen, this particular image powerfully conveys the sense of events in motion, of an unfolding sequence generated by unseen forces, at micro-cosmic and macro-cosmic levels, even as it fundamentally alters our experiences of time and space.  Given Rovelli’s musings on the Big Bang and the origin of time, we might view in the painting a process of creation, akin to Genesis; not only is the Lord of Death being unleashed within a cell, but a new world, of unclear potentialities, is being born.

In turn, in the spirit of Macfarlane’s meditations on the wild places, there is something thrilling and thoroughly terrifying about the inexorability of the virus’ progression, fully distinct from anything like emotions or sentient intentionality,  within the human body and across the human family— a vast  alien “disinterest,” which we glimpse in this deeply compelling, blazing, and disturbing scene.

Near and Far: Opening the TLC Extension Collection

A final note on the start of the TLC Extension Collection, curated by Gordon Froud as the second 21 day round of The Lockdown Collection. Listening to the two artists featured in the opening webinar,  Sizwe Khoza and Robyn Penn, I was struck that their woks, while created under conditions of the Lockdown, are emphatically not interiors, but rather are explorations of great temporal and spatial expanse, albeit in very different registers. Sizwe's young man is outdoors on an elevated wall gazing out into the distance; Robyn has the viewer assume, as Pam notes, an elevated point of view looking into the vastness of creation, at both macrocosmic and microscopic scales. The inevitable inward mental and spiritual journeys undertaken within the close quarters of quarantine, paradoxically,  have inspired both artists to look behind the bounds of conventional experience. As they traverse the vastness of time and space, they evoke threshold qualities of our elusive present, and help us glimpse within detailed renditions of immediate scenarios, quietly enigmatic intimations of the infinite.