The Old Births and the New: Stompie Selibe

Overview: This largely abstract image may have implicit figurative elements. The core of the image has dark black forms, perhaps evocative of a body in motion, with bright orange, blue, yellow and red segments superimposed, moving outwards to lighter surrounding washes, towards white and pink edges.


Artist's Statement:  My work is a representation of what the lockdown has been for me, it has sheltered me as well as meant that in my deepest thoughts and feelings I have felt deep wells of missing, of loss. The isolation has meant living more with my own, and our own, shadows as well as with our own imaginations and our ideas of new possibilities. COVEN 19 has highlighted for me how we need to find new ways of living life together, of leaving our deepest shadows and fears behind us. All of us need to learn to change what we know, to make new possibilities, new creations of our shared world and own own worlds within that. The work represents a new beauty within COVEN 19, to see the opportunity to have life as making art, making new meaning about ourselves and our lives together and exploring how to work, live and create together as a people, the many branches joined 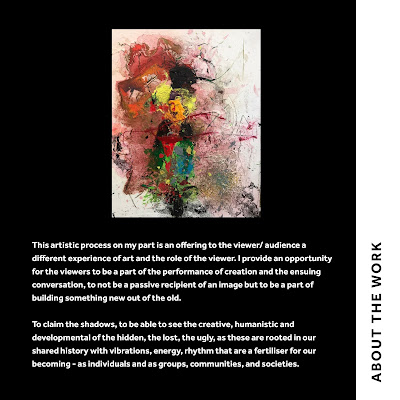 Pamela Allara; As an artist, Stompie Selibe has nurtured not only his own creativity, but those of others. Trained as a printmaker at Artist Proof Studio, where he also taught for a number of years, Selibe was active in its HIV/AIDS and other community outreach programs. Classes at Johannesburg’s Art Therapy Center provided additional motivation as well as the skills he needed to lead workshops where people were enabled to learn to use art to transform their lives and help themselves heal. He continues to participate in community workshops in Johannesburg on a regular basis.

His painting Old Births and The New (formerly Shangaan Dress) is his response to the coronavirus pandemic. When left teaching printmaking, Selibe turned to painting, and his art evolved from a linear to a painterly style. None of the careful advanced planning required by printmaking is in evidence here: the painting appears spontaneous, with its thick, layered impasto registering his emotional, intuitive response to each color and shape as it was laid down. An accomplished musician who composes songs for his penny whistle, improvisation from music extends to his visual processes as well. He considers sounds and images to be deeply intertwined.

Despite this improvisational approach, the painting coheres, bringing our eyes from the lightly brushed perimeter to the densely layered center. And there, one can begin to discern a figure or maybe two, although it is not evident that that was what the artist intended. When Selibe turned to painting, his pleasure at the simple laying down of paint was balanced by his enduring interest in the subject matter of portraits of people from Johannesburg communities. Because of my familiarity with his previous work, I see in the lower right, just as the dense impasto lightens, a small black person wearing a patterned green dress. And, although this is even less clear, perhaps behind this small figure is a larger one with an orange face and yellow hair. Is the green wrap the Shangaan dress to which the original title referred? One cannot say for certain. If there is a figure here (or perhaps another), it is one Selibe is calling up from his memory or from the thoughts that spring to mind when contemplating South African culture generally at this moment in time.

Whatever this figure/s may or may not be, it is engulfed in vigorous energies over which it has no control. As the artist has written, “Coven 19 has highlighted for me how we need to find new ways of living life together, of leaving our deepest shadows and fears behind us. All of us need to learn to change what we know, to make new possibilities, new creations of our shared world and own worlds within that.”

What does Selibe mean by Coven 19? A coven is a gathering of witches, who to say the least have been given a bad rap, not only in their own times, but at present. But covens were places where non-traditional, spiritual knowledge was shared, and new communities formed. As he wrote rather presciently in 2018 for an article in Art Africa: “My art is an act of the soul not the intellect. When we are dealing with sounds and visions we are in the midst of the sacred self. We are involved with forces and energies larger than our own. We are engaged in a sacred transaction of which we know only a little, the shadow not the shape. We invoke the great creator when we invoke our own creativity and those creative forces have the power to alter lives, fulfil destinies and answer our dreams in our human lives.” In this work, Selibe may be suggesting that it is from these covens, or newly-formed communities we create virtually as we self-isolate during the pandemic, that we will find new ways of living together. The dense impasto lightens up on the lower right, opening up a space for the figure/s to move forward.

In the dark center of Selibe's composition we  may see an allusion to the Vatsonga concept of the ndzuti or shadow, a kind of bodily life force that sustains the person that is intimately linked to the moya, a spiritual presence that rejoins the ancestral realm at death.  The artist's statement suggests that the period of confinement during the Lockdown has led to a rediscovery of one's shadow, as profoundly important attributes of the self, previously forgotten or neglected, are rediscovered. The title's reference to "dress" may allude not only to the vibrant dance costumes of Shangaan-Tsonga people but also to the broader meanings of clothing and adornment, which are themselves dynamics frontier between person and the outer society, between past and present, between visible and invisible worlds.

Speculatively, the artist's imagery may evoke the generative spark of the Vatsonga fire drill, made from the wood of the bulolo (hibiscus). As chronicled nearly a century ago by Henry Junod (1927, vol I, 21), the two pieces of the drill are respectively termed 'wife' and 'husband' and their conjugal rubbing together brings forth life-sustaining fire, evocative of the marital conjoining that culminates in birth and the continuation of the lineage.

Our bodies, and our own lineages. are now under attack from an invisible enemy in the era of COVID-19, which the artist in his statement wryly renames, "COVEN-19," implying it is a kind of latter day assault of witchcraft. Yet in the struggle we are reintroduced to inner resources we never knew we had. Radiating out from the painting's inner, dark shadow are a grand panoply of colors, in powerful solids and gentle washes, ultimately merging into the surrounding lighter field. Something profound is being created here, as suggested by the artist's revised title, "The Old Births and the New."  Junod reports that the Vastonga funerary process centers on a special fire, that is kept burning day and night through successive mortuary dances , to help guide the deceased towards ancestorhood, so that he or she may safeguard future generations.  Might we be beholding in Selibe's vibrant painting, similarly,  a great dance of life and death, from which something new, both terrifying and strangely beautiful, as Yeats puts it in The Second Coming, "Slouches towards Bethlehem to be born?"

Posted by Mark Auslander at 6:42 AM