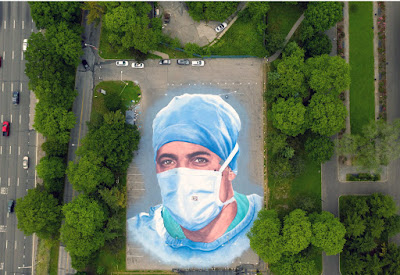 Overview:  The artist Jorge Rodríguez-Gerada has recently created a 20,000 square foot massive painting of a masked medical professional, “Somos La Luz” (“We Are the Light” in the parking lot of the  Queens Museum. The work depicts the Dr. Ydelfonso Decoo, a physician and the secretary of the immigrant healthcare network SOMOS Community Care,  who died of COViD-19.  As noted in many media outlets, the work, which honors all frontline healthcare workers, is intended to be visible to satellites in orbit.

A video of the making of the painting is visible here.

Pamela Allara:  On June 1, Cuban-American artist Jorge Rodriguez-Gerada completed a monumental, 20,000 square foot mural painted on a parking lot outside the Queens Museum. A portrait of physician Dr. Ydelfonso Decoo, a front-line health care worker who contracted and died at age 70 of COVID-19 while ministering to the sick, the doctor is depicted wearing a white face mask and a blue protective head covering. Although many artworks created in response to the pandemic have depicted health care workers wearing protective masks, this one is far more moving than most; indeed it is one of the most memorable responses to date. First, there is the mere size; throughout art history, those leaders considered heroes were given outsized portraits to indicate the importance of their achievements. However, I can think of few monuments, other than the pyramids (which are of course abstract), that are so large that they can be seen from outer space! The doctor’s healing light thus metaphorically extends beyond the limits of the globe itself. In addition, the mural is not placed a wall, as are Rodriguez-Gerada’s previous portrait murals, but on the ground, in a public parking lot. As the artist stated to Artnet News:

“I wanted to create a place to mourn, where we can contemplate the difficulties that so many people are going through, after losing so many loved ones…It’s a place that, in a political climate where there is more division than ever, we can find a way to bring ourselves back together as a community and as a nation.”

With over 100,000 dead from corona virus, a good part of the psychic toll on the nation as a whole has been due to the lack of a ceremony of public mourning organized by this administration. The profound anxiety felt by the majority of the population has been compounded recently by the public execution of an unarmed black man, George Floyd, by a white policeman. Just has the pandemic has predominately affected communities of color, so the ensuing protests over the deaths of blacks at the hands of white police have laid bare once again the enormous racial inequities in our society. South African writer Lebogang Mashile sent an immedite note of sympathy to African Americans: “As you fight two pandemics, racism and COVID, we see you taking to the streets to express your rage, deep sorrow, and frustration. Black bodies worldwide know this pain.”

Again, the lack of an empathetic response or any potential action on the part of our racist president has increased our malaise, our sense that society may well be falling apart. But Rodriguez-Gerada has created a space where people can come together.  Walking over Dr. Decoo’s face would not be an act of disrespect, but one which can begin to, as the artist says, “to bring ourselves back together as a community and a nation.” This is precisely the role that art is uniquely able to assume in a time of crisis. And it is important to note that the mural was in fact a community effort, hence the plural title, “We are light.” Rodriguez-Gerada worked with Somos Community Care, which serves mostly Latino and Chinese patients in the ‘hot spot’ of Corona (!), Queens, as well as Mark the Road New York, the NYC Parks Department, and the Queens Museum. A 2009  book by  Rebecca Solnit, A Paradise Built in Hell,, argues that frequently times of crisis and trauma lead to positive social change after they pass. “Somos La Luz” offers the space where such change can begin. 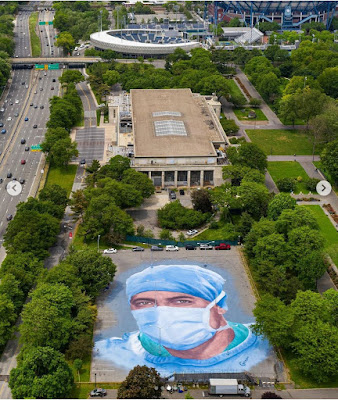 Mark Auslander: Somos La Luz would seem to recall the widespread genre of Ex Votos paintings in Latin America, in which a votive image of a Saint, often martyred, allows for a meaningful of exchange of gazes between the Saint and the devout, conveying blessings to the faithful. Here' the memorialized dead person and the thousands of other healthworkers honored  by extension are not strictly speaking saints, but they have died in a noble cause, and have saint-like characteristics.

Inevitably, as in many other art works depicting masked frontline medical workers around the world, the primary attention of viewers is directed to the subject's eyes, which in this instance seem to leap out at us, almost as if they are radiating the light referenced in the work's title.  Yet,  unlike nearly every mural, or even the massive sculptures at Mount Rushmore, this piece is not designed to be viewed live by spectators.  Rather, the piece can only be viewed as a whole through the mediation of photographs, taken from drones, helicopters, or even, we are told, from satellites in orbit.  The Dead hero, in this instance, looks heavenward.

Otherwise, only small pieces of the work can be glimpsed by pedestrians walking over it, or drivers driving over it, when the image is not covered by parked cars.  The key thing appears to be not so much viewing the work in person as knowing that it is there, or viewing photographs on line or in the press.  Whatever exchange of gazes takes place with the striking eyes of this heroic figure is thus at a profound remove, an appropriate state of affairs in our era of social distancing.

Posted by Mark Auslander at 2:37 PM