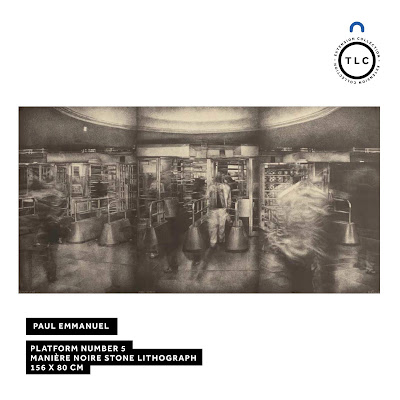 Overview: Lithograph, organized as a triptych,  of  passengers passing through the revolving turnstiles at Park Station underground in Johannesburg, the largest rail station on the African continent.  To the right, blurred shapes signal the movement of people through the station. 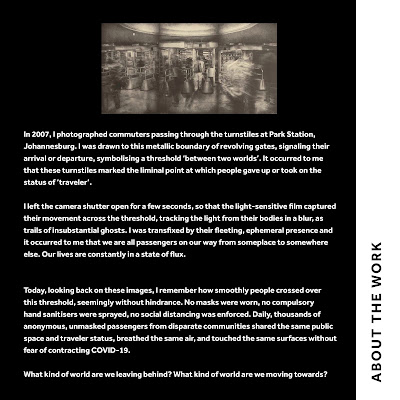 Artist's Statement: In 2007, I photographed commuters passing through the turnstiles at Park Station, Johannesburg. I was drawn to this metallic boundary of revolving gates, signalling their arrival or departure, symbolising a threshold ‘between two worlds’. It occurred to me that these turnstiles marked the liminal point at which people gave up or took on the status of ‘traveller’.

I left the camera shutter open for a few seconds, so that the light-sensitive film captured their movement across the threshold, tracking the light from their bodies in a blur, as trails of insubstantial ghosts. I was transfixed by their fleeting, ephemeral presence and it occurred to me that we are all passengers on our way from someplace to somewhere else. Our lives are constantly in a state of flux. 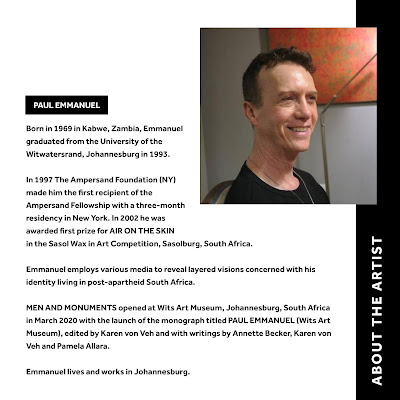 Using the photographs as references, I then spent 3 months painstakingly scratching the transient images into a layer of black ink on a large flat limestone with a tiny blade, working from dark to light. I then hand-printed an edition of lithographs directly off this scratched surface and hand-coloured the prints afterwards.

Today, looking back on these images, I remember how smoothly people crossed over this threshold, seemingly without hindrance. No masks were worn, no compulsory hand sanitisers were sprayed, no social distancing was enforced. Daily, thousands of anonymous, unmasked passengers from disparate communities shared the same public space and traveller status, breathed the same air and touched the same surfaces without fear of contracting COVID-19.


Pamela Allara; Throughout his career, one of the artist Paul Emmanuel’s primary concerns has been the construction of masculinity. In 2008, a stunning traveling exhibition, “Transitions,” premiered at the Apartheid Museum in Johannesburg. Consisting of 5 suspended frames containing 5 drawings each, the installation presented moments of transition toward the securing of masculinity, from the circumcision of an infant, to marriage, to military service and finally to the physical decline of old age. Because each ritual action was depicted in 5 phases, there could be no ‘decisive moment’ when masculinity was firmly fixed. Rather, maintaining one’s gender identity as male was revealed to require repeated trials over a lifetime. The fifth series of drawings was an abrupt ‘transition’ from the intimacy and closeness of the first four. In platform number 5, we are taken to the turnstile of a railway station, where through the time lapse exposure of the photographic sources for the drawings, we see blurred figures passing through the barriers, for the most part coming toward us.


In both the original 5 drawings, and in the resulting lithograph, we cannot see faces or clothing, and so, and in the end the gender identity of the blurred, ghostly figures is irrelevant. In this image, everything is in transit, nothing stable. As we viewers mentally join the spectral crowd on its quotidian travels, we are invited to confront the transitions in our own lives, in our sense of our own identity.

This evocative lithograph was completed nearly a decade ago, but has renewed relevance today. This time of stasis, when daily activities such as commuting, have been discontinued, is equally a time of transition, one where there is little sense of what the future might look like when the pandemic has passed. Journalists who have chosen to write about this moment have all commented that this suspended moment has provided the time for introspection, the examination of one’s identity and that of society at large. The liminal figures in platform number 5, their destinations unclear, ask us to look inward as well. After all, everything else is a blur.

(1) a period of separation, of radical rupture from everyday conventions and surroundings (for example, a bride just before her wedding being secluded away);

(2) a 'liminal period,' betwixt and between the conventional orientations of normal experience, in which images and performances may be highly exaggerated and abstracted (such as the bride walking down the aisle, in between the states of  being unmarried and married, wearing the most elaborate and hyperbolic of costumes); and,

(3) the period of reaggregation, in which the person being transformed is reintegrated into ordinary life, albeit at a higher or deeply altered status than where they started (the bride reunited with the groom, now a married couple, as they joyously exit the chapel). Everything is the same, yet everything is different.

The passengers moving through Paul's train station, the largest rail station in all of Africa, undergo their own miniature rite of passage, separated from their ordinary conditions, then they enter into the intermediate status of being passengers, then they are returned to more conventional frameworks of spatial and temporal  experience. These tripartite structures are recursive, and take place simultaneously at higher and lower scales. Thus, the entire experience of being in the metrorail system can be thought of as a liminal period, while punctuated by smaller liminal periods in threshold zones, such as passing through the turnstile or alighting or disembarking from a train, or even the entire train journey itself.

Viewed retroactively,  Platform Number 5 speaks to our current COVID-19 predicament, which is itself structured as a kind of grand, if unscripted, rite of passage.  We have been separated from the world we thought we knew, and now find ourselves in an extended liminal period, as we look forward to an eventual period of reintegration, although we can't yet quite envision what that might look like.   We might even, now, be inclined to apprehend the turnstiles as time machines, transporting each unwitting passenger from the innocent days before before masks and sanitizers into our perilous era.

Alternately, Platform Number 5, through our current eyes,  can be viewed a collective descent into our present-day intermediate condition, the gateway into our modern Purgatory, with little sense of when in fact we might re-emerge from Limbo into the light.  The division of the lithograph into three sections could thus be read from left to right as a kind of summary of our past, our liminal present, and hoped-for future.

Viewing the image from through our present-day eyes, the third field, to the far right, could be seen as our suddenly obscure future. How appropriate that it is filled with an indistinct and blurred swirl of human energy, the fog of the world yet to be. Through the artist's translation of time lapse photography, we behold a miniature Twister that will, like Dorothy and Toto in the Wizard of Oz, lift us high into the storm before returning us to a world that is strangely familiar, and yet emphatically, not Kansas anymore.

Victor Turner.  1967. Betwixt and Between: The Liminal Period in Rites de Passage.  In The Forest of Symbols: aspects of Ndembu Ritual.  Cornell University Press. 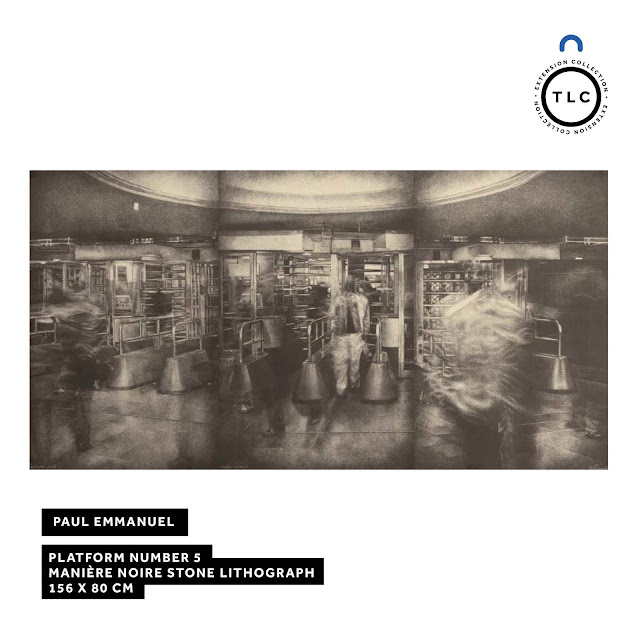 Posted by Mark Auslander at 2:11 PM