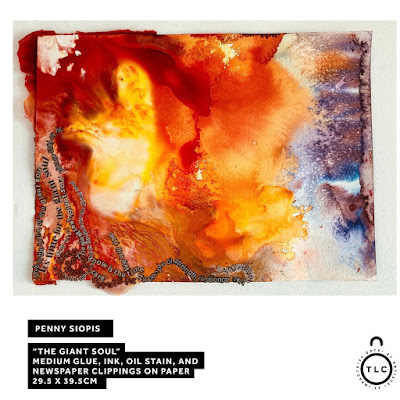 Overview:  Day 21, the final day of South Africa's The Lockdown Collection features a  new pen and glue work by Penny Siopis, "The Giant Soul" (2020). The abstract image is dominated by a red, orange and yellow configuration ( perhaps a conflagration?), with a white-orange shape in the middle left, an apparent profile of a human figure. Along the right border are swirls of blue, flecked with other cool colors; In the bottom left quadrant of the image are newspaper clippings, arranged it appears to echo the outlines of the white-orange figure: "This is the time of the giant soul," 'The giant soul," "We will rise," "A people of strength, resilience, and compassion."

Artist's Statement:  For lockdown I changed my apartment into a studio.  It’s small and beautiful.

I’m continuing to work with glue and ink, the medium I’ve been experimenting with for years.  It’s an unpredictable process, with the glue changing from white substance to transparent layer as it reacts to the air, ink, water, gravity and my gestures.   You must give over to what happens, a situation full of risk and uncertainty.   The medium has it’s own ‘life’, making it a partner in creating the work, rather than being a passive material on which to impose human mastery.   What emerges from the process are shapes that are open to infinite associations.  In it’s intimate material transformation, and the potential images it delivers, I can imagine larger philosophical questions, and situations of social change.

The title of my intimate painting The Giant Soul is a phrase from newspapers collected during this period.  The Giant Soul struck me as an emotive and poetic way to think about ‘the collective’ as a giant soul.  Solidarity.  In this time of isolation we can metaphorically become one with souls all over the world, as well as those inhabiting the afterlife.

The tendril form of the newspaper clippings echoes Late and Soon a gigantic work I made in 2013 in response to devastating personal loss.

A prolific artist, Penny Siopis created iconic Resistance Art paintings in the 1980s and continues today to make powerful work addressing ecological and social transformation. The early collaged paintings in particular were crowded edge to edge with a plethora of detail, suggesting in their horror vacui either the detritus of a failed political system (Patience on a Monument, 1988) or the excesses of personal accumulation that must be disposed of after the owner’s death (Charmed Lives, 1999). In both instances, the personal is intertwined with the collective. Recently, as she began to experiment with glue as a medium, her compositions became simplified and more abstract, though still resonant with the themes Griselda Pollock has described as “the brute forces of history [entangled] with the delicate threads of human vulnerability.”

Although Siopis’ paintings are often monumental in scale, The Giant Soul, despite its title, is an intimate work on paper. On close inspection, however, the space depicted appears vast. As the eye moves from the cloudy right-hand border, we seem to be witnessing a vast explosion. Natural elements seem beyond human control, in much the same way that Siopis’ complex interaction with glue and ink leaves the final resolution of the work open to chance. The expanding ball of flame metaphorically suggests the rapid spread of the coronavirus, as in Kim Berman’s World on Fire from Day 11. In The Giant Soul, the mediums spill over the boundary of the paper, another powerful metaphor for a virus that overwhelms the ability to contain it.

But the work’s title and the words in the newspaper clippings that seem to have been blown by the force of the explosive fire down to the lower left of the composition offer a more optimistic reading: “This is the time of the giant soul,” “we will rise,” “a people of strength and resilience.” During this crisis, solidarity and human connection will also spread like fire.

Twenty one days ago, The Lockdown Collection began with Gordon Froud's eerie scene of a deserted Johannesburg, over which a new star was risen--the novel coronavirus shining in all its terrifying glory. By a curious coincidence, this has been the period when the planet Venus has reached a conjunction with the Pleiades star cluster, and blazes over all the world, the third brightest body in the heavens. It was hard, gazing at Gordon's haunting image, not to think back to William Butler Yeats' poem The Second Coming (1919), written just after The Great War and the global influenza pandemic, and wonder, with the poet,  "And what rough beast, its hour come round at last, Slouches towards Bethlehem to be born?"  What precisely does this new visage in our firmament hearken for all of us?

Three weeks later, from Penny Siopis' apartment-turned-studio, we might see an initial glimpse of an answer.  We all know we stand on a precipice, as we try to imagine the post-pandemic world, wondering just what might be in the process of becoming. For the past three weeks, the artists featured in The Lockdown Collection have grappled with this challenge. Will we see a world riven by fear, descending into atavism, ethno-nationalism, xenophobia, and balkanized mini police states? Or might a new global ethic emerge, in which the specific pandemic of Covid-19, during which we have so often been exhorted to join in common battle, be grasped as an opportunity to embrace an enduring new covenant of collaboration, mutual solidarity, and deep compassion?   Might we all join in shared struggle against the multiple pandemics of global climate change, greed, poverty, racism, and all manner of other afflictions?

In the protean, emergent shapes of Siopis' flowing, multi-hued glues, allowed to roam free and only partially directed by the artist's hand, we might discern the outlines of that slouching rough beast, waiting to be born. The scale of the work is both cosmic and intimate. We might see echoes of the vast Pillars of Creation digitally reconstructed by the orbiting Hubble Space Telescope, allowing us to gaze into a stellar nursery 6.000 light years away.  Equally. we may be in the presence of a kind of spiritual sonogram, gazing into a womb, beholding emergent new life of a kind we cannot yet even name.

We all agree, seeing the manifold failures of national and international institutions to protect us fully from the virus that, as Yeats' famously put it a century ago:  "Things fall apart; the centre cannot hold."  This may be especially true for those of us in the United States:  here in Lansing, Michigan, where I write these words, thousands of rightist demonstrators, encouraged by ceaseless science denialism from the White House and Fox News, yesterday descended on the state capitol to protest the lockdown imposed by Governor Gretchen Whitmer. Some milled together on foot, some brandished confederate flags and automatic weapons, no doubt spreading the virus. Their jammed cars and honking horns blocked access to our main hospital and awoke desperately ill patients inside, fighting for their lives. A thoroughly sorry spectacle of selfishness and wilful ignorance, as so many lay dying.

And yet, we see so many places, near and far, signs of enormous courage and new forms of affiliation being forged, often in spite of the failures of national leaders. (Michigan, whose brave Governor has been demonized by President Trump as "that woman from Michigan," is today receiving loaned ventilators from the Governor of New York state. At the very same hospital entrance that was blocked by yesterday's foolish protesters,  we went for a test the day before and were warmly welcomed by medical staff, who had ingeniously jury-rigged a way to  maintain social distancing while conducting needed lab work. There are of course thousands of other examples of such bravery and creativity around the world during this emergency.

As a "Giant Soul," this art work heralds the emergence of something greater than ourselves or of any nation.  I provisionally read Siopsis' epic image from right to left. We begin with the watery ocean, from which all life emerged and then enter into the burning fires of the present pandemic, in which we have lost, and will lose, so many loved ones before their time. Perhaps we are meant to recall the old prophecy, in the words of the spiritual, Mary Don't You Weep: "God gave Noah the rainbow sign/no more water, but fire next time."

Then the "rough beast" emerges. The white-yellow figure might be a woman, her face in profile to the left, her hands put forth as if presenting a blessing or an offering. From her outstretched hands flow forth the words of hope and charity, promising the emergence of a new era, the time of the giant soul, of shared resilience and compassion. I find myself thinking of the ancient Sybil of Cumae, honored in William Kentridge's recent opera, "Waiting for Sybil." This ancient oracle wrote her prophecies on the leaves of a tree, at the opening of her cave. A great wind would scatter the leaves, so that those seeking her guidance never knew if a specific prophecy was truly intended for them.

As we look forward to emerging from this firestorm, it is for us, those who survive, to lovingly reassemble these fragmented words (including those left behind by the victims of the virus) and piece together a renewed covenant,  woven out of language, art, science, and compassion.  We must, to be sure,  take time to mourn those who were taken from us.  And then in their honor and in solidarity with one another, we must all be the midwife of that better world yet to come,  ensuring that a new and better star over Bethlehem may shine its light over every one of us,  late and soon, near and far.

Those oriented towards Buddhistic traditions may be inclined to see in Siopis' white-yellow-red female figure the traces of a bodhisattva, a highly evolved being who has voluntarily renounced Enlightenment in order to guide lesser beings through stages of creation, as they strive towards Buddhahood. She might recall the figure of Kannon-sama (Guanyin), sometimes known as the Goddess of Mercy, who radiates infinite compassion (and "hears the prayers of the universe"), as she guides all along a redemptive path. Perhaps the painting's upper white left shape is the sun, indicative of the higher levels of being towards which we aspire.

As Mark notes, the flowing words of hope, made out of newsprint, seem to come out of this being's extended hands, not her mouth. Perhaps her outstretched hands are forming a joint-hand mudra, a Hindu or Buddhist gesture that may convey deep wisdom and compassion, or aid in the focusing and channeling of spiritual energies. Although she emerges out of the flames of our current terror, she may offer the Buddha's promise of extinguishing the "three fires" (or "three poisons") that haunt sentient life, the fires of greed, aversion, and ignorance.  Reborn like the Phoenix out of the current flames of destruction, she encompasses the souls of the Dead, now released from their suffering bodies into an ephemeral being who is beyond flesh, a numinous presence that is both insubstantial  and of profound substance.  Gazing into these swirling, emergent forms we are all enlarged, as we join together with the Living and the Dead in the next stage of our shared journey, becoming one with the giant soul of the universe.